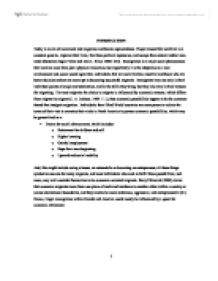 Today is an era of movement and migration and human uprootedness.

INTRODUCTION Today is an era of movement and migration and human uprootedness. People around the world are in a constant quest to, improve their lives, flee from political repression, and escape from natural and/or man-made disasters (Augie Fleras and Jean L. Elliot, 2002: 242). Immigration is a major social phenomenon that involves more than just a physical relocation, but importantly it is the adaptation to a new environment and, some would agree that, individuals that are more flexible, assertive and those who are better decision makers are more apt to becoming successful migrants. Immigrants vary not only in their individual points of origin and destination, and in the skills they bring, but they also vary in their reasons for migrating. For most migrants the choice to migrate is influenced by economic reasons, which differs from migrant to migrant (J. A. Jackson, 1969: 111), thus economic possibilities appear to be the common thread that instigate migration. Individuals from Third World countries are more prone to violate the terms of their visa to overstay their visits in North America to pursue economic possibilities, which may be generalized as a: * Desire for social advancement, which includes: o Betterment for children and self o Higher learning o Gainful employment o Hope for a new beginning o Upward and social mobility And, this might include owing a house, an automobile or becoming an entrepreneur; all these things symbolize success for many migrants, and most individuals who seek to fulfill these possibilities, and more, may well consider themselves to be economic-oriented migrants. Barry Chiswick (2000) claims that economic migrants move from one place of work and residence to another either within a country or across international boundaries, and they tend to be more ambitious, aggressive, and entrepreneurial (61). Hence, illegal immigration within Canada and America could mostly be influenced by a quest for economic attainment. ILLEGAL IMMIGRATION Illegal immigration occurs when a person's presence is in violation of the law, or when the person engages in fraud or misrepresentation, or arrived without proper documents at ports of entry. ...read more.

That day, about four people were apprehended and pushed into an unmarked van. Everyone had to identify themselves to the officers or else get thrown in the van. Usually the ones [immigration officers] wear regular clothing so you can't recognize them easily. Anyway, over the years, I've come to have a second-sense of cautiousness. I came here to make money to send to my family, and I wasn't going to let them catch me before I was ready. Boss man was not even upset that he was fined, but was upset that they took three good, dependable workers. From that day on there was always a lookout person, and those who were illegals were made to work at the back of the factory. Boss man was also more cautious when it comes to hiring illegals, but even so, he still employed them because he was able to get away with many tax restrictions and pay cheap salaries that no Canadian would feel comfortable with.6 Workplace raids can be a good way of catching illegal immigrants. However, adding to the realism, it can be disruptive, affecting citizens, legal residents and undocumented individuals alike." Shelly Carey 7 who came to Canada for economic reasons also recalls a similar situation where she was nearly apprehended by immigration officials in a home on Lansdowne Avenue in downtown Toronto. She recalls getting a telephone call warning her to get out of the house. The person on the other end of the phone, she says, informed her that a person called immigration officials to search out the home because of the prevalent drug use and sale. Unfortunately, Dawn along with two other persons, who were illegally residing in Canada for several years, were detained and questioned by three men from Immigration Canada. Shelly points out that the officers came in an unmarked white van, wore regular attire and could be mistaken for businessmen. ...read more.

Finally, illegal immigration has become a major social phenomenon and many countries are seeking ways to curtail and combat this crisis; and although immigration laws are enacted to prevent people from abusing the system, this does not deter the flow and trend of illegal immigration into Canada and America. NOTES 1. Saudi, Mani. Immigration Matters, Toronto, Share Magazine, 1993, 2. See W.G. Robinson, "Response to the Report entitled: Illegal Immigrants," Issue Paper, Feb. 15, 1983, pp: A80. 3. Audrey Thomas sponsored herself under humanitarian and compassionate grounds and was successful in her gaining landing status in 1999. She is now a Canadian citizen and resides in Hamilton, with her husband. 4. See "Offenses Related to Documents," Immigration and Refugee Act, 2002, 122(1) pp: 42. 5. Pauline Cole was unsuccessful in her application with Citizenship and Immigration Canada. She now resides in the United States. 6. Ray Plunkett married his high school sweetheart in Canada and eventually got his permanent landing. However, this marriage was not successful. Today Ray is married to Olga, who he is sponsoring, and resides with her and their child in Toronto. 7. Shelly Carey has not yet received her landing status in Canada. Currently she is seeking legal advice and is hoping to sponsor herself under humanitarian and compassionate grounds in 2004. 8. See David North and Marion F. Houstoun, "The Characteristics and Role of Illegal Aliens in the United States Labour Market: An Exploratory Study" (1979). 9. See Rita Simon and Margo Delay, "The Work Experience of Undocumented Mexican Women Migrants in Los Angeles," published by International Migration Review, (1984) pp: 1212-1229. 10. Refer to) on Human Smuggling and Trafficking, 2002, 117(4) pp: 41. 11. "Chinese Migrants in Central and Eastern Europe: The Cases of the Czech Republic, Hungary and Romania," published by Migration Information Programme, Budapest, Hungary, Sept. 1995, pp: 2, and also in New York Times, June 14, 1995, pp: A12. 12. See Robert L. Bach and Rita Argiros, "Economic Progress Among South East Asian Refugees in the United States," in Adelman (1991), pp: 322. ...read more.