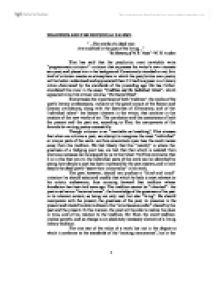 Tradition and the Individual talent - &quot;...The words of a dead manAre modified in the guts of the living...&quot; &quot;In Memory of W. B. Yeats&quot;- W. H. Auden

TRADITION AND THE INDIVIDUAL TALENT: "...The words of a dead man Are modified in the guts of the living..." "In Memory of W. B. Yeats"- W. H. Auden Eliot has said that the poet/critic must inevitably write "programmatic criticism"- criticism that expresses the writer's own interests as a poet, and places him in his background. Consciously intended or not, this kind of criticism creates an atmosphere in which the poet/critics own poetry will be better understood and appreciated than if it had to appear in a literary milieu dominated by the standards of the preceding age. He has further elucidated this view in the essay "Tradition and the Individual Talent", which appeared in his first critical volume, "The Sacred Wood". Eliot stresses the importance of both 'tradition'- the works of the poet's literary predecessors, inclusive of the grand output of the Roman and Grecian civilizations, along with the doctrines of Christianity, and of the 'individual talent'- the factors inherent in the writer, that combine in the creation of the new works of art. The correlation and the coexistence of both the present and the past are, according to Eliot, the components of the formula for writing poetry successfully. ...read more.

The poet should be aware that art never improves, but that the medium through which he writes should be different from those used earlier on. Hence the mind of the poet, as an individual entity, ceases to exist independently, and becomes a 'melting pot' of all that is, and all that has gone before. More over, for the writer, the present is a vantage point, for it provides for a awareness of the past could not have had of itself in its own time- a result of the fact that the past is a part of what we are. Refuting the claim that poetry requires an inordinately large amount of learning, Eliot suggests that a surfeit of knowledge "deadens... the poetic sensibilities". He does suggest though, that the knowledge of the poet must be used in a proper manner, while simultaneously developing a poet a consciousness of the past. As a result, the poet experiences a "continual surrender" of all that he is at the present, into something that develops with time, and has been doing so since the conception of time, something more "valuable". ...read more.

anarchy which was present in the extreme individualism of the "spirit of revolt" which infected so much of European art and thought of the 1920's. Discipline is one of the first needs of art, and at a time when all chains and bonds on artistic activity were being condemned and flouted, his emphasis on the need to respects the past as the life giving tree on which the branch of the preset was putting forth fruit was fully justified. Eliot's unified vision of literature has not altered, although his suspicion of individualism in art as a danger to tradition was considerably lessened by time. A major problem with his theory is, rather than conform to the art of the past, it is necessary for an artist to have a more forward vision, and he should try and be innovative. It has also come under the attack of many critics- Yvor Winters has said that Eliot reduces the poet to an "automaton". Wimsatt and Brooks have said that Eliot's theory represents a return to something like Aristotelian theory- "...hardly since the 17th century has a critic...so resolutely transposed poetic theory from the axis of pleasure versus pain to that of unity versus multiplicity..." 1 ...read more.