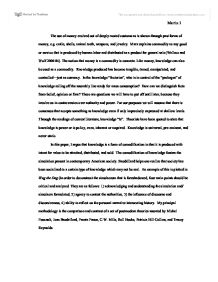 The use of money evolved out of deeply rooted customs as is shown through past forms of money, e.g. cattle, shells, animal teeth, weapons, and jewelry. Marx explains commodity as any good or service that is produced by human labor and distributed as a product for general sale (Wallace and Wolf 2006:84). The notion that money is a commodity is concrete. Like money, knowledge can also be used as a commodity. Knowledge produced has become tangible, tamed, manipulated, and controlled-just as currency. In the knowledge "factories", who is in control of the "packages" of knowledge rolling off the assembly line ready for mass consumption? How can we distinguish facts from belief, opinion or flaw? These are questions we will have to put off until later, because they involve us in controversies over authority and power. For our purposes we will assume that there is consensus that accepts something as knowledge even if only imprecisely expressed at shallow levels. Through the readings of current literature, knowledge "Is". Theorists have been quoted to state that knowledge is power or is policy, even, inherent or acquired. Knowledge is universal, pre-eminent, and never static. In this paper, I argue that knowledge is a form of comodification in that it is produced with intent for value to be attached, distributed, and sold. ...read more.

By seeking the divisions of the simulation through empirical research and explicit examination, we allow ourselves to deconstruct and the opportunity to reorganize. The 'real' knowledge is only in 'meta' transitioning and floats over our simulacrum. Contradictory to what is general belief, but the 'reality' is still within reach. Foucault would insert that as long a resistance is in play so is power. Deconstruction demands agency and appropriate attitudes. It is up to us to again become the critical thinkers of this time, parallel to those theorists of Frankfurt School, by disengaging from the illusions set in place by our carelessness. It is at this peak that the influence of discursiveness and discourse emerge and infuse major roles. "Discursiveness and Discourse" Michel Foucault (1926- 1984) has a large body of works that show the life of a political philosopher. He was vitally concerned with the understanding and transformation of the intersectionality of power, knowledge and truth. Foucault brings to light the way in which the individual is affected by the large and small segments of society. He examines the "abnormal" human subject as an object-of-knowledge of the discourses of human and empirical science such as psychiatry, medicine, and penalization. He demonstrates the power-knowledge relationship that the individual is also subjected to in everyday life. Aristotle once stated in Metaphysics that, "'All men by nature desire knowledge' (www.wisdomquotes.com)." ...read more.

When learning about the Civil Rights struggles of the African American community, the AUC is recognized to have constituted many of the demonstrations for equal rights during the Civil Rights Movement. Contrary to institutional concerns, Spelmanite and young men of Morehouse were famous for asserting themselves and fighting for the equality of all; however, in the latter classes of the African American scholars seem satisfied with social events and status within their simulated environment. My thesis explores the dynamics of gender roles between Spelman and Morehouse students in comparison to the students during the Civil Rights movement. The ability to use Mills reflexivity is more than helpful in the success of producing a valid research. Research Questions: Q1: What are the indicators of male and female privilege in the Spel-House relationship? Q2: How do assumptions of the term feminism and/or feminist's impact the gender roles taken in the Spel-House relationship? Q3: What are the general levels of gender consciousness among Spelman and Morehouse students? Q4: What are the factors that promote the gender constructs in the Spel-House relationship? Previous studies on gender constructs have been more descriptive in the methodological approach and have not systematically attempted to empirically describe the manner in which the Spelman College and Morehouse College relationship is explained by select internal and external factors. ...read more.