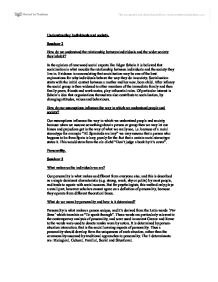 Understanding Individuals and society. Seminar 2 How do we understand the relationship between individuals and the wider society they inhabit? In the opinion of renowned social experts like Edgar Schein it is believed that socialisation is what moulds the relationship between individuals and the society they live in. Evidence is accumulating that socialisation may be one of the best explanations for why individuals behave the way they do in society. Socialisation starts with the initial contact between a mother and her new, born child. After infancy the social group is then widened to other members of the immediate family and then finally peers, friends and work mates, play influential roles. Of particular interest is Schein's idea that organisations themselves also contribute to socialisation, by changing attitudes, values and behaviours. How do our assumptions influence the way in which we understand people and society? Our assumptions influence the way in which we understand people and society, because when we assume something about a person or group then we may let our biases and prejudices get in the way of what we really see, i.e. because of a racial stereotype for example "All Spaniards are lazy" we may assume that a person who happens to be from Spain is lazy, purely for the fact that a certain racial stereotype states it. This would stem from the ole clich� "Don't judge a book by it's cover". Personality. Seminar 3 What makes us the individuals we are? Our personality is what makes us different from everyone else, and this is described as a single dominant characteristic (e.g. ...read more.

A group is basically a collection of individuals, who have joined for a practical reason, such as economic safety, security or social reasons. And although they are individuals, a group is often formed from very 'like-minded' people. Do people behave differently in groups? Within a group people can often lose their own identity, and therefore will definitely behave differently whilst in the group, i.e. if someone within the group thinks that one course of action is best and the rest of the group thinks otherwise, then that person will almost certainly conform under the pressure of the group. Another way some people will act differently in a group situation is, that with the support of others within the group, they may become more confident than they would've been before. This would have good implications, when brainstorming ideas, because people will feel more confident to speak their mind. Is there a 'dark side' to group behaviour? In 'groupthink' by Irvine Janis, he defines the dysfunction of highly cohesive groups as, "a deterioration of mental efficiency, reality testing, and moral judgement that results from in-group pressures.". Committees who suffer from groupthink are so bent on reaching consensus that there is no realistic appraisal of alternative courses of action in a decision, and deviant, minority or unpopular views are suppressed. In the symptoms of groupthink, it could be said there is a 'dark-side', because the group will often ignore questionable ethical or moral issues or stances, those who oppose the group are sometimes thought of as evil, and because of the fact that loyal members don't question the 'direction' ...read more.

2) Adult: In this state the person acts like a mature adult. In this state people attack problems in a "cool headed", rational manner. People don't act impulsively in this state and in dealings with other people the adult state is fair and objective. An example would be a sales-manager who is presented with a high expense account from a subordinate, but calmly says "This appears high, we should look into why it's like this!". 3) Parent: In this state people act like domineering parents. Individuals can be over protective or critical, and is also illustrated by those who establish standards and rules for others. An example would be the supervisor, who goes up to a group of employees and says "Come on you guys, stop fooling around. You have to earn your keep around here." Transactions between ego states: It should be pointed out that people generally display all 3 ego states, but one state may dominate the other two. It is said by most TA authors that all 3 states are needed to have a healthy personality. An important factor in this is how ego states match or conflict with each other, the transactions involved between ego states are: Complementary transactions, Crossed transactions and Ulterior transactions. Strokes and games: The three ego states and the three types of transactions are basic elements of TA. In addition, however, there are other concepts and dynamics inherent in the TA approach. Two of the more important are strokes and games: 1) The concept of strokes: From infancy and throughout everyone's lives, everyone needs affection, recognition and praise. 2) The games people play: These games are such that they have surface logic, but hidden meanings. ...read more.