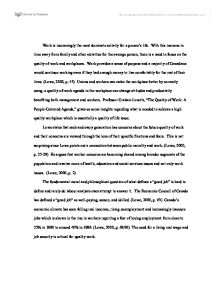 Unions and Workers Play in Promoting a Quality-of-Work Agenda

Work is increasingly the most dominate activity for a person's life. With this increase in time away from family and other activities for the average person, there is a need to focus on the quality of work and workplaces. Work provides a sense of purpose and a majority of Canadians would continue working even if they had enough money to live comfortably for the rest of their lives. (Lowe, 2000, p. 43) Unions and workers can make the workplace better by correctly using, a quality-of-work agenda in the workplace can change attitudes and productivity benefiting both management and workers. Professor Graham Lowe's, "The Quality of Work: A People-Centered Agenda," gives us some insights regarding what is needed to achieve a high quality workplace which is essentially a quality of life issue. Lowe states that each and every generation has concerns about the future quality of work and their concerns are viewed through the lens of their specific fixations and fears. This is not surprising since Lowe points out a connection between public morality and work. (Lowe, 2000, p. 25-28) He argues that worker concerns are becoming shared among broader segments of the population and involve more of health, education and social services issues and not only work issues. (Lowe, 2000, p. 2) The fundamental moral and philosophical question of what defines a "good job" is hard to define and rarely do labour analysts even attempt to answer it. ...read more.

Lowe points to unions focusing more on the economic definitions of quality jobs and he indicates several ways in which unions can fight for better work quality for members. Lowe believes that a key issue for unions to address is the "family-friendly" workplace due to a demographic shift which is including more women in the workplace. He urges unions to push for additional flexible hour positions while mentioning the issue of, when flexible working arrangements are available, workers tend to put in longer than average hours. (Lowe, 2000, p. 166) Lowe states that unions can use the corporation's language of family-friendliness to challenge the work hours issue leading to 17% of workers working longer than 40+ hours in a typical week, with over half being unpaid for overtime, even though unemployment and underemployment are increasing. (Lowe, 2000, p. 72) While employers have always opposed shorter work weeks due to perceived employee overhead costs, unions should use this option and negotiate tradeoffs like rewarding seniority with more time off rather than more pay. (Lowe, 2000, p. 78) Another issue that unions can focus on is the unbalanced distribution of access to training and work with employers and government to give their members more universal access to gain new skills and therefore new work opportunities. This will require a shift from youth education to a more open and flexible system providing opportunities to obtain education throughout an employee's lifetime. ...read more.

These quality of work indicators are significant, especially now during an economic crisis, and are critical to keep workers' quality of life. In order to be successful, the unions will need to link working conditions, morale and productivity in an increasingly precarious economic climate as a solution to employers and not as another cost. Workers can assist the union in gaining solving important quality of work and quality of life issues by realizing that workplace change can be negotiated and that it doesn't have to be imposed by management and that worker input is crucial for success. The collaborative nature of workplace innovation means that employees will have a chance to gain the soft skills to assist in participating in the planning, implementation and monitoring of the changes. Workers will have to realize that there will be trade-offs that will not be advantageous to the workers and accept those changes as a part of creating a quality workplace. (Lowe, 2000, p. 146) Both unions and workers need to see the reality of membership on the ability of the union to assist workers in gaining a quality of work agenda. With an aging population, the demographic patterns of union membership are changing. That with unionization rates among 15-24 year olds declining from 16% to 13% between 1989 and 1994, there is less of a voice for change now and into the future. (Lowe, 2000, p. 167) Without a strong voice for the needed change, organizations will once again be able to move back to traditional management practices and ignore the voice of the worker. ...read more.