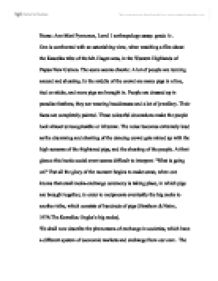 Unravel the underlying principles in moka-exchange, and in the bridewealth-exchange amongst the Nuer of Southern Sudan, in the light of the French sociologist Marcel Mauss' theory of the 'Form and reason for exchange in archaic societies.'

Name: Ann-Mari Pynnonen, Level 1 anthropology essay: grade A-. One is confronted with an astonishing view, when watching a film about the Kawelka tribe of the Mt. Hagen area, in the Western Highlands of Papua New Guinea. The scene seems chaotic: A lot of people are running around and shouting. In the middle of the crowd are many pigs in a line, tied on sticks, and more pigs are brought in. People are dressed up in paradise feathers, they are wearing headdresses and a lot of jewellery. Their faces are completely painted. These colourful decorations make the people look almost unrecognisable or inhuman. The noise becomes extremely loud as the drumming and chanting of the dancing crowd gets mixed up with the high screams of the frightened pigs, and the shouting of the people. At first glance this hectic social event seems difficult to interpret: 'What is going on?' But all the glory of the moment begins to make sense, when one knows that small moka-exchange ceremony is taking place, in which pigs are brought together, in order to reciprocate eventually the big moka to another tribe, which consists of hundreds of pigs (Strathern & Nairn, 1974:The Kawelka: Ongka's big moka). We shall now describe the phenomena of exchange in societies, which have a different system of economic markets and exchange from our own. The particular aim of this paper is to unravel the underlying principles in moka-exchange, and in the bridewealth-exchange amongst the Nuer of Southern Sudan, in the light of the French sociologist Marcel Mauss' theory of the 'Form and reason for exchange in archaic societies.' We shall begin by outlining the main points of Mauss' insight on gift-giving within his famous, 1923, essay 'The Gift', and continue by examining, to what extent Mauss' theory can be recognised within the two types of exchanges chosen. Finally we shall point out some of the weaker arguments within 'The Gift'. ...read more.

Any disapproval about this matter between the brothers is unacceptable, and would be seen as a serious assault towards the custom, which would destroy family and kinship ties. Incest is a great taboo amongst the Nuer leading into strict rules of marriage prohibitions. A man cannot marry into a family or lineage with which he has close kinship ties. Therefore bridewealth connects people, between whom there was no obligations or behaviour patterns before. This, indeed, is the most significant character of the bridewealth, as it creates new social relationships. Affinal ties are transformed into kinship ties very slowly, and there are strict rules of appropriate behaviour, for example between the husband and his parents-in-law (Evans-Pritchard, 1951). This can be seen as a long period of what Van Gennep called the 'liminal rites'; an unsettled period of transformation between past and future; a no man's land. During this stage of the marriage, bridewealth plays a very important role by helping to regulate and gradually develop these new social relations closer. Generally the birth of a child finally creates a kinship tie between the families. Unlike the bridewealth, in which the price of the gift is mainly decided on what the bridegroom and his people possess (through endless debates), the moka is characterised by rivalry, in which the members of the contract aim to out do one another in generosity. Moka is the extra, the interest (Charsley, lecture, 5.2.2003). Therefore moka appears to go beyond total services, and can be seen as an intermediate form of an exchange, which Mauss called the potlatch (of North West American Indians). Mauss defined potlatch as a 'total services of an agonistic type', because potlatch is characterised by rivalry, destruction of wealth, combat, as well as an exchange of war, and it unites ambivalent opposing forces of solidarity and violence (Mauss, 1990: p. 7; Godelier, 1999). The characteristic elements involved in the obligation to reciprocate are honour, status and prestige, or more precisely a fear of losing them through a failure to reciprocate. ...read more.

47; Godelier, 1999:p. 7). Mauss' insight seems to be in the category of beliefs without any scientific foundation, and his theory of the soul of the gift would be almost impossible to be observed within the bridewealth, moka, or in other ethnographic examples in a concrete form. It can be argued though, that Mauss had succeeded to illustrate that people make often decisions, which are emotional and personal, without being based on logical reasoning (Brier, 2002). We have now identified Mauss' system of total services, as we have seen that pigs for the Kawelka, and cows for the Nuer are not just for utilitarian or economic purpose, but a way to be able to take part into a meaningful part of society, and to define and secure bonds between peoples. If exchange fails through excessive rivalry, aggression and wars erupt (Brier, 2002). We have attempted to describe the workings of complete social systems. Moka and bridewealth are frameworks in which the people operate. Exchange is not a custom, but a complex enterprise and an achievement (Charsley, lecture, 5.2.2003). Levi-Strauss agreed with Mauss about the system of total services, but criticised Mauss from having disregarded that 'the primary fundamental phenomenon of social life is exchange itself,' and that society is founded on exchange and exists only through the combination of all sorts of exchange' (Levi-Strauss, 1949:p. 47; Godelier, 1999:p. 19). However, Mauss can be credited to be the first to acknowledge that economics is integral to the culture of a society (Brier, 2002). We have also identified the three obligations within gift giving through recognising the rules of legality and the nature of self-interest involved in exchange, implying a social pressure, a need for public approval, and a desire to gain status and profit from counter gifts to mention but a few. But when it comes to the power in the object, or the spirit of the gift, which enforces repayment, we are left without a real prove of its existence. We shall leave this matter open for personal decision whether to believe in the spiritual aspect of the gift or not. ...read more.