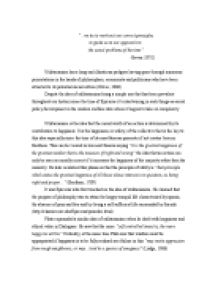 Utilitarianism. When it comes to welfare and wellbeing utilitarianism plays its role and can be considered an important part.

﻿?...we try to work out our correct principles to guide us in our approach to the social problems of the time? -Bevan (1952) Utilitarianism has a long and illustrious pedigree having gone through numerous permutations in the hands of philosophers, economists and politicians who have been attracted to its potential social reform (Oliver, 2006) Despite the idea of utilitarianism being a simple one that has been prevalent throughout our history since the time of Epicurus it?s intertwining in such things as social policy development in the modern welfare state where it begins to take on complexity. Utilitarianism is the idea that the moral worth of an action is determined by its contribution to happiness. It is the happiness, or utility, of the collective that is the key to this idea especially since the time of its most famous promoter if not creator Jeremy Bentham. This can be viewed in his most famous saying ?it is the greatest happiness of the greatest number that is the measure of right and wrong? the idea that an action can only be seen as morally correct if it increases the happiness of the majority rather than the minority. He later reworked this phrase so that the principle of utility is ?that principle which states the greatest happiness of all those whose interest is in question, as being right and proper...? (Bentham, 1789) It was Epicurus who first touched on the idea of utilitarianism. He claimed that the purpose of philosophy was to attain the happy tranquil life characterised by aponia, the absence of pain and fear and by living a self sufficient life surrounded by friends. ...read more.

This is known as hedonism (www.centreforsocialjustice.org.uk) Bentham's is the simplest form of hedonism, if you have more ?pleasantness? you?ll be happier, if you have more pain you?ll be worse off which he measured in duration and intensity. When it comes to welfare and wellbeing utilitarianism plays its role and can be considered an important part. Wellbeing also known as ?quality of life? is at it says concerned with the quality of life of citizens that are affected by the broad social policies of its national governments. Well being itself consists of a greater balance of pleasure over pain, an idea known as ?evaluative? or ?prudential? hedonism. Wellbeing also goes somewhat hand in hand with welfare. Welfarism is a sub section of welfare, an idea that Raz (1986) calls the ?humanistic principle?, that is the ?explanation and justification of the goodness or badness of anything that derives ultimately from its contribution, actual or possible, to human life and its quality.? What is meant by this is that everything is considered in terms of how it affects human wellbeing. So if utilitarianism is the idea that the moral worth of an action is weighed in the consequences that it has and wellbeing is to do with the quality of someone?s life how does this affect social policy implementation. First let us look at another concept of utilitarianism and wellbeing that of the objective list theory. One in particular influenced by Aristotle and developed by Thomas Hurka (1993) ...read more.

It is fair that everyone should be provided with the same basic level of provision, providing everyone with a minimum, an idea at the heart of the NHS with its ?cradle to grave? ?safety net? ideals. Yet at the same time some will be more deserving than others, dependant on age, level of need, or situation. Utilitarianism clearly supports the ideal that everyone should be provided with the same basic level because it provides the greatest happiness for the greatest amount of people. But is this necessarily fair, after all would you provide the same level of care to some who didn?t need it as much as another. In conclusion then despite the principle of utilitarianism being one of a seemingly philosophical nature dealing with the correct actions of man as Plato described the morality of universal law defining the consequences of action as seen in the works of Bentham and Kant, utilitarianism when evaluated in terms of the allocation and provision of health care services is actually both prominent and useful. Without the underlying idea?s of happiness of the greater number such services as provided by the NHS would not work efficiently or fairly, and would be controlled more in terms of a governments economy and expenditure plans. Whilst these cannot be ruled out it is the fundamental idea of social justice and the quality of life that means its allocation and provision is much more effective and provides an overall universal happiness allowing it to deal with sudden rises in demand and obstacles as the furore around the MMR jab. Without utilitarianism these would not be considered and a much more wide ranging detrimental effect could be created. ...read more.