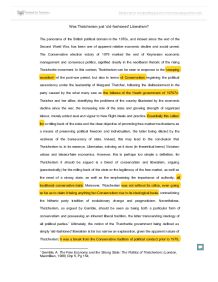 Was Thatcherism just 'old-fashioned' Liberalism? The panorama of the British political domain in the 1970s, and indeed since the end of the Second World War, has been one of apparent relative economic decline and social unrest. The Conservative election victory of 1979 marked the end of Keynesian economic management and consensus politics, signified clearly in the neoliberal rhetoric of the rising Thatcherite movement. In this context, Thatcherism can be seen in response to the 'creeping socialism' of the post-war period, but also in terms of Conservatism regaining the political ascendancy under the leadership of Margaret Thatcher, following the disillusionment in the party caused by the what many saw as the failures of the Heath government of 1970-74. Thatcher and her allies, identifying the problems of the country illustrated by the economic decline since the war, the increasing role of the state and growing strength of organized labour, merely added zeal and vigour to New Right ideals and practice. Essentially this called for a rolling back of the state and the clear objective of promoting free market mechanisms as a means of preserving political freedom and individualism, the latter being diluted by the vastness of the bureaucracy of state. Indeed, this may lead to the conclusion that Thatcherism is, in its essence, Libertarian, echoing as it does (in theoretical terms) ...read more.

The point that should highlighted therefore that this, although monetary policy in itself is not neoliberal, the idea of shifting the emphasis away from demand management to supply side economics, gives responsibility to the individual, allowing the means to civil liberty, especially in the era of financial deregulation and instant credit. This is a clear facet of liberalism, synonymous with the liberal tradition of freedom in terms of an 'absence of coercion', but should nevertheless be seen as part of the combination of doctrines in Thatcherism. Another argument that contests Thatcherism as being wholly liberal as opposed to conservative in nature, is the fact that although many facets of policy had their inspiration in liberalism, elements of traditional conservatism can be identified. Interestingly, neoliberal ideas are abundant in the economic conduct of the Thatcherite government, implementing policy on the lines of civil liberty and individualism, but with regards aspects of the Conservative's social policy, it should be deemed less liberal and more in lines with traditional Conservatism, in the form of preserving the status quo. Attempts were made to reform elements of social policy, as to reduce the extent of government expenditure, for example the welfare state, but the combination of the need to address specific circumstances of the economy and indeed electoral concerns, many examples of policy did not harmonise with neoliberal thought. ...read more.

The use of monetary policy, lower taxation, promotion of competition and privatisation and the assault on trade union power, all were justified in the end objective of free market economics and reduced state, but not at the expense of authority, natural hierarchy and indeed the middle and propertied classes. These latter qualities point to the need to interpret Thatcherism not just in a specific political stance, but a blend of two traditions in response to the economic decline of Britain, as a means restore Conservative ascendancy, rejuvenate British economic competitiveness and promote the idea of civil liberty, in the traditional liberal view of freedom being defined in terms of the 'absence of coercion'. 1 Gamble, A: The Free Economy and the Strong State: The Politics of Thatcherism; (London, Macmillian, 1988) Chp 5, Pg 154; 2 Gamble, A: Ibid Chp 5, Pg 156; 3 Dearlove, J and Saunders, P: Introduction to British Politics; Third Edition (Polity, 2000) Chp 10, Pg 407; 4 Curwen, P: Understanding the UK Economy: Monetary Policy in the UK 1971-93; Third Edition (Macmillan, 1994); 5 Dearlove, J and Saunders, P: Ibid; Chp 10, Pg 418; 6 Peden, G C: British Economic and Social Policy: Lloyd George to Margaret Thatcher; Second Edition (Phillip Allan, 1991) Chp 9, Pg 218; 7 Dearlove, J and Saunders, P: Ibid; Chp 10; 8 Dearlove, J and Saunders, P:Ibid; Chp 10; 9 Gamble, A: Ibid; Ch 5, Pg 154 10 Gamble. A: Ibid; Ch 5, Pg 155; ...read more.

3/5. I would probably award this a high 2.2. depending on the level and module requirements.

This essay is written in a nice prose style and contains quite a lot of dense ideas, but it is poorly defined and lacks an appropriate reference to the literature.

The terms 'Thatcherism', 'liberalism', 'neo-liberalism' and so on all need to be given very early consideration in order to spell out how they can be seen to differ. As it is, the author spends most of the essay picking semantics without making it clear what they understand these different terms to mean.

Equally, the structure is more implicit than explicit (clearly, the focus is on economic liberalism and social liberalism as two distinct strands) but the argument is lost under reams of excessive historical detail, which is not related back to the argument.

Finally this essay lacks critical engagement with the literature. A lot of the 'facts' here aren't referenced, and there is little attempt to compare and contrast different academics' perspectives on Thatcherism. Instead, everything is presented as an unproblematic narrative.