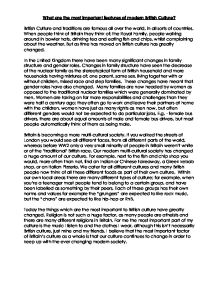 What are the most important features of modern British Culture? British Culture and traditions are famous all over the world, in all sorts of countries.

What are the most important features of modern British Culture? British Culture and traditions are famous all over the world, in all sorts of countries. When people think of Britain they think of; the Royal Family, people walking around in bowler hats, drinking tea and eating fish and chips, whilst complaining about the weather. But as time has moved on British culture has greatly changed. In the United Kingdom there have been many significant changes in family structure and gender roles. Changes in family structure have seen the decrease of the nuclear family as the stereotypical form of British household and more households having mixtures of; one parent, same sex, living together with or without children, mixed race and step families. ...read more.

E.g. - female bus drivers, there are about equal amounts of male and female bus drivers, but most people automatically think of them as being male. Britain is becoming a more multi-cultural society. If you walked the streets of London you would see all different faces, from all different parts of the world, whereas before WW2 only a very small minority of people in Britain weren't white or of the 'traditional' British race. Our modern multi-cultural society has changed a huge amount of our culture. For example, next to the fish and chip shop you would, more often than not, find an Indian or Chinese takeaway, a Greek kebab shop, or an Italian Pizzeria. ...read more.

Each of these groups has their own norms and values for example the "grungers" are expected to like rock music, but the "chavs" are expected to like hip-hop or RnB. Today the things which are the most important to British culture have greatly changed. Religion is not such a huge factor, as many people are atheists and there are many different religions in Britain. For me the most important part of my culture is the music I listen to and the clothes I wear, although this isn't necessarily British culture, just mine and my friends. I believe that the most important factor of Britain's culture as a whole is that our culture continues to change in order to keep up with the ever changing modern society. ...read more.