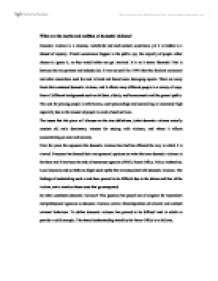 What are the myths and realities of domestic violence

What are the myths and realities of domestic violence? Domestic violence is a classless, worldwide and multicultural occurrence, yet it is hidden in a shroud of mystery. If such occurrences happen in the public eye, the majority of people either choose to ignore it, as they would rather not get involved. It is as it states 'domestic' that is between the two partners and nobody else. It was not until the 1970's that the feminist movement and other researchers took the task in hand and found some damaging reports. There are many facets that construed domestic violence, and it affects many different people in a variety of ways, from all different backgrounds such as children, elderly, and homosexuals and the general public. The cost for placing people in safe homes, court proceedings and counselling is immensely high especially due to the amount of people in need of such services. The issues that this piece will discuss are the true definitions, (what domestic violence actually consists of) male dominance, reasons for staying with violence, and whom it affects (concentrating on men and women). Over the years the exposure that domestic violence has had has affected the way in which it is viewed. Everyone has formed their own personal opinions on what the term domestic violence is for them and it has been the task of numerous agencies (WHO, Home Office, Police Authorities, Local Councils and so forth) to dispel such myths that are associated with domestic violence. The findings of undertaking such a task have proved to be difficult due to the shame and fear of the victims, not to mention those cases that go unreported. ...read more.

This now gives the police and the victims a clearer view on how to tackle such disturbances. The Crime and Disorder Act (1998) has placed a requirement on local authorities and police in which they are to act accordingly. Other changes in the law are the introduction of the Protection from Harassment Act (1997); this makes it an offence to behave in such a way that a person feels harassed or fearful of violence. This tackles the psychological aspects of domestic violence. (Home Office1.7: 3) Part VI of the family Law Act (1996) consists of consistent set of civil orders that deal with the occupation of the family home in order to help the victim without too much of a drastic change (Ibid). With such vigorous law changes it makes the problem of domestic violence possible to solve, theoretically it does, but why is it still prevalent? Is this because the information is not reaching the people that need it? People who are suffering from such torment will find it hard to gain access to such help as they could be fearful of the repercussions, or they have not got the confidence in which to gain access. Either way the information is there and maybe it should be highlighted more. It could save someone's life, or give them confidence to leave such situations if they know that there are people who can help. People who have been lucky enough not to be in such a position of not having suffered such crimes, tend to take the blinkered view that "Why do they not leave? ...read more.

Are weapons used? Does it always end in death? Finding the causes is a valid place to start researching such acts, but they will never be able to prove that it no longer exists, as there are a lot more unreported cases happening throughout the world, that unfortunately will not come to light, due to the stigmas and fear that are still in place with domestic violence. Until the myths are changed then hopefully it will lead to a better understanding of the victims and the offenders, and then the really hard work will begin in ending such terrible acts. Most people are in ignorant bliss about domestic violence. Those that do suffer though from the violence are extremely brave to report such incidences, but a larger number will unfortunately suffer in silence. There are a lot of services in use for people needing help, unfortunately there are not a lot of places available to met the requirements. Services are mainly set in place for women and due to the ratio of victims and availability there are not enough places for everyone. More funding needs to be in place for both sexes, and the research into domestic violence on men needs more researching. It is a subject that has many avenues in which to investigate, but whether they will lead the researcher to finding an answer to resolve such incidences rather than creating theories or excuses for domestic violence. After reading material that concerns domestic violence, the conclusion is still the same, that nobody has the right to physically hurt or abuse another person and it goes to show that domestic violence is a powerful tool when used in the wrong hands. ...read more.