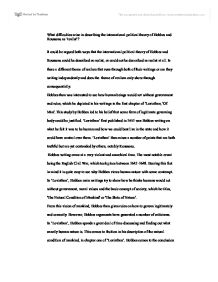 What difficulties arise in describing the international political theory of Hobbes and Rousseau as 'realist'?

What difficulties arise in describing the international political theory of Hobbes and Rousseau as 'realist'? It could be argued both ways that the international political theory of Hobbes and Rousseau could be described as realist, or could not be described as realist at all. Is there a different theme of realism that runs through both of their writings or are they writing independently and does the theme of realism only show through consequentially. Hobbes then was interested to see how human beings would act without government and rules, which he depicted in his writings in the first chapter of 'Leviathan, 'Of Man'. This study by Hobbes led to his belief that some form of legitimate governing body could be justified. 'Leviathan' first published in 1651 was Hobbes writing on what he felt it was to be human and how we could best live in the state and how it could have control over them. 'Leviathan' then raises a number of points that are both truthful but are yet contended by others, notably Rousseau. Hobbes writing came at a very violent and anarchical time. The most notable event being the English Civil War, which took place between 1642-1648. Bearing this fact in mind it is quite easy to see why Hobbes views human nature with some contempt. ...read more.

It appears the one reason for Hobbes to advocate this law is that it allows him a way to illustrate a break away from the natural condition of mankind and into a state of sovereignty. Hobbes believed that the political institutions of the newly formed state should be absolute and sovereign. The sovereign, he argued, would find within its rights to act as a peacemaker in disputes and as a third party in confrontation between two subjects who could be entrusted with power to defend each subject from another or to join collectively to ward off a threat from another state. The sovereign, he also stated, would decide what was right and wrong and punish accordingly in order to keep its authority and power. The sovereign would receive its authority from its subjects who consent to be governed, in the form of the social contract. Thus allowing the sovereign to technically do what he wants in the name of the people. If the sovereign creates a law, it is the people creating the law. Hobbes argued then that the consent to be governed is decided by and between the people, the sovereign does not take part in it as it does not exist until the contract is completed. ...read more.