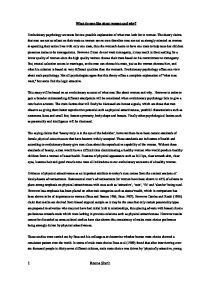 What do men like about women and why? Evolutionary psychology accounts for one possible explanation of what men look for in women. The theory claims that men are not as reliant on their mate as women are on men therefore men are not as strongly oriented as women to spending their entire lives with only one mate, thus the woman's desire to have one mate to help raise her children pressures males to be monogamous. However if men do not want monogamy, it may result in them settling for a lower quality of woman since the high quality women choose their mate based on his commitment to monogamy. But, mutual selection occurs in marriages, so the man can choose his mate, just as the woman chooses him, and often his criterion is based on very different qualities than the woman's. Evolutionary psychology offers one view about male psychology. Not all psychologists agree that this theory offers a complete explanation of "what men want," but some find the logic attractive. This essay will be based on an evolutionary account of what men like about women and why. However in order to gain a broader understanding different standpoints will be considered when evolutionary psychology fails to give a conclusive account. The main factors that will firstly be discussed are honest signals, which are those that men observe as giving them better reproductive potential such as physical attractiveness, youthful characteristics such as neotenous faces and small feet, feature symmetry, body shape and b*****s. Finally other psychological factors such as personality and intelligence will be discussed. The saying claims that 'beauty truly is in the eye of the beholder', however there have been certain standards of female physical attractiveness that have become widely accepted. ...read more.

Scientists say that the preference for symmetry is a highly evolved trait seen in many different animals. Female swallows, for example, prefer males with longer and more symmetric tails, while female zebra finches mate with males with symmetrically coloured leg bands Fluctuating asymmetry (FA) is a measure of symmetry of a bilateral character (e.g. ear length or hand breadth) that fluctuates. Although this appears to be a minute detail, it could have its links to our evolutionary past. This is because departures from perfect FA are assumed to be the result of environmental stressors such as physical assaults, parasitic infections, reduced nutrition and disease. For example a high FA (e.g. one foot longer than the other) is thought to indicate a poor condition on the assumption that it requires a sound metabolism to grow perfectly symmetrical features. Therefore good symmetry of the body and face are deemed to be indicators of health. Body shape preference has changed through time, however it has been widely accepted that the hourglass figure (narrow waist, with wider chest and hips) is attractive. Singh (1993) using a rating measure for female line drawings has reported that men tend to have a preference for women with a low waist to hip ratio (WHR) centering near 0.7 (curvaceous body). This is shown in real life scenarios, as Playboy centrefold models and Miss America beauty competition winners have WHR around this optimal. However the possible reasons for this attraction in body shape are varied. One possible explanation is because the 0.7 WHR is the optimal amount of fat distribution for fertility. Zaadstra et al (1993), based on a large study of Dutch women (N = 542), found that a 0.1 unit increase in waist-hip ratio led to a 30% decrease in probability of conception per cycle. ...read more.

Another major critique of the evolutionary account is that it fails to explain psychological factors that are shown to be important to men, especially in long-term relationships, as selecting a young woman with attractive child bearing hips doesn't necessarily mean she will be a good mother, ignoring factors such her parenting skills. Therefore evolutionary theory assumes that men ignore the quality of life for the child once they are born but are more focused on reproducing larger quantities of children. This however is not the case as social situations are changing and gender divides are narrowing men are increasingly more involved in the quality of bringing up their children, therefore physical attractiveness may have short term appeal in terms of initial selection of mates however not necessarily long term appeal in terms of commitment where psychological characteristics maybe of more importance. Therefore it can be argued whether men are selecting solely for fertility as evolutionary theory claims or someone that arouses them psychologically, the answer maybe both. Therefore future directions should compare the importance of physical attractiveness in existing long-term relationships, to psychological factors such as personality and intelligence to see how males weight importance, especially in today's society where traditional gender roles are changing. Resources Aronson, Elliot. 1999. The Social Animal. New York: Worth Publishers, Inc. Barrett, L., Dunbar, R & Lycett, J. (2002) Human Evolutionary Psychology. Basingstoke, UK: Palgrave. Buss, D. 1987. s*x differences in human mate preferences: An evolutionary persepective. In Sociobiology and Psychology, ed. C. Crawford et al. Erlbaum. Buss, D. 1989. s*x differences in human mate preferences: Evolutionary hypothesis tested in 37 cultures. Behavioral and Brain Science, 12: 1-14. Buss, D. 1994. The Evolution of Desire: Strategies of Human Mating. New York: Basic Books. Furnham, A. et al. 1997. ...read more.