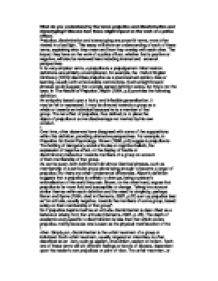 What do you understand by the terms prejudice and discrimination and stereotyping? Discuss how these might impact on the work of a police officer.

What do you understand by the terms prejudice and discrimination and stereotyping? Discuss how these might impact on the work of a police officer. Prejudice, discrimination and stereotyping are powerful terms, more often viewed in a bad light. This essay will show an understanding of each of these terms, explaining what they mean and how they overlap with each other. The impact they have on the work of a police officer, whether that is positive or negative, will also be reviewed here including internal and external perspectives. In its very simplest terms, a prejudice is a prejudgement. Most lexicon definitions are similarly uncomplicated, for example, the Oxford English Dictionary (OED) describes prejudice as a preconceived opinion, bias or learning, usually with unfavourable connotations. Such straightforward phrases would suggest that a single agreed definition exists, but this is not the case. In The Nature of Prejudice, Allport (1954, p.9) provides the following definition: An antipathy based upon a faulty and inflexible generalisation. It may be felt or expressed. It may be directed towards a group as a whole or towards an individual because he is a member of that group. The net effect of prejudice, thus defined, is to place the object of prejudice at some disadvantage not merited by his own conduct. ...read more.

and retitled to reinforce offensive stereotypical views of hippies. Modern culture is full of other negative stereotyping of minority groups, for example, the assertion by the then London Police Commissioner, Sir Paul Condon that most robberies are committed by black men only helps to reinforce that negative image (Toynbee, 1995, p.1). Positive stereotypes should not be overlooked, but it is important to remember that these positive images can still be harmful. Large generalisations such as all black men are good at basketball, or all Asians are intelligent (Smith & Mackie, 2000, p.163) may appear flattering, but actually put unnecessary pressure on individuals to conform to that image. Another consideration is the "kernel of truth theory" proposed by Peabody (1985, p.29) that argues that in general, stereotypes are not biased beliefs but accurate reflections of reality. Although contested by other academics, such theories allow the individual to rationalise their own stereotyping. For example, police officers could rationalise stopping and searching more Asian men by convincing themselves that they are more likely to catch a terrorist that way (Sugden, 2005). This point alone demonstrates how stereotyping can impact on the work of police officers in a potential dangerous way. Sugden argues that it would be easy for a terrorist cell to counter stereotypical stop and search patterns by recruiting light skinned suicide bombers. ...read more.

Also, every police officer and Community Support Officer has receives Community and Race Relations training so they can better understand the harm done to the organisation by individual prejudices. This process has not been painless however, with the training courses leading to a number of discrimination allegations and counter-claims (Cowan, 2005, p.8). It seems that removing these prejudices will require perseverance by the organisation. In conclusion, our views of prejudice have developed over the years with considerable academic discussion. Simply, it could mean an attitude towards members of a group just because they are in that group. On the other hand, there has been less debate over the meaning of discrimination, but a lot of legislation to counter its effects, notably in the workplace. Stereotyping can be positive in limited circumstances, but is usually seen in a negative form. As a means of simplifying our world, stereotypical images can often lead to someone being unfairly labelled. The impact of these three areas on the work of a police officer is tangible. Whilst stereotyping by an officer is unhelpful, the use of a stereotypical template to aid decision-making is shown to work. Harmful prejudices and discrimination should have no place in a police service, but still persist both towards colleagues and the public. The police are making efforts to resolve these issues, and must continue to do so, or risk losing the confidence and support of the wider community. ...read more.