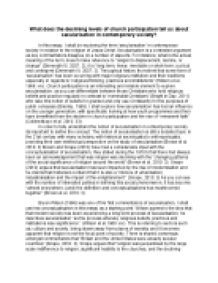 What does the declining levels of church participation tell us about secularisation in contemporary society?

﻿What does the declining levels of church participation tell us about secularisation in contemporary society? In this essay, I shall be exploring the term ?secularisation? in contemporary society in relation to the religion of Jesus Christ. Secularisation is a contested argument as key commentators disagree on a number of aspects. For instance; what is the actual meaning of the term, does it make reference to ?religion?s displacement, decline, or change? (Demerath III, 2007: 2), it is ?long term, linear, inevitable or short-term, cyclical and contingent (Demerath III, 2007: 2). Throughout history its evident that some form of ?secularisation? has been occurring with major religious institution and their traditions especially in regards to ?religious thinking, practices and institutions? (Wilson et al., 1966: xiv). Church participation is an interesting and reliable element to explore secularisation, as you can differentiate between those Christians who hold religious beliefs and practice regularly in contrast to ?nominalist Christians? (Bright in Day, 2011) who take this notion of beliefs for granted and only use Christianity for the purposes of public censuses (Brierley, 1999). I shall explore how secularisation has had an influence on the younger generation, with specifically looking at how youth programmes and their have benefitted from the decline in church participation and the rise of ?immanent faith? (Collins-Mayo et al. 2010: 33). In order to fully understand the notion of secularisation in contemporary society its important to define the concept. The notion of secularisation is still a debated topic in the 21st century with many scholars, with historical sociologists to anthropologists, providing their own intellectual perspective on the study of secularisation (Brown et al. 2010: 3) Brown and Snape (2010) have had a considerable input with the conceptualisation of secularisation, they stated during the 1970?s that there had always been an acknowledgement that was religion was declining with the ?changing patterns of the social significance of religion around the world? (Brown et al. ...read more.

2010: 10) for instance; in times of bereavement and illnesses. The younger generation in this case would not have to come in contact with these arrangement until they become ?adults? so after marriage or when they have children (Stanton, in Arweck and Jackson (2014: 135) Collins-Mayo et al. (2010) had researched 300 young people between the ages of 18 and 23 and what their relations and beliefs were in regards to the church and Christianity. They concluded that many young people had affiliated their beliefs with their ?immanent faith? (Collins-Mayo et al. 2010: 33). Immanent faith plays a huge role in the lives of the youth, as they turn to their ?family, friends and self? (Moynagh, 2012: 85) in order determine and validate their own beliefs as they consider them to anchors for ?meaning, hope and purpose? (Moynagh, 2012: 85). Collins-Mayo et al. (2010) found that youth programmes had ?fostered only a passing interest? (Stanton, in Arweck and Jackson, 2014: 135) for Christianity as the younger generation were already content without religion in their day-to-day lifestyle. Evidently there is this ongoing theme of ?present time-orientation? with the younger generation, as they would only look to achieve ?happiness and fulfilment for the present time and near future? (Savage et al. 2006; ). They would become involved with the church to the extent where they are morally content with themselves, but they don?t feel obligated or see attended the church as a form of commitment just another layer of their lifestyle. This links back and is reinforced by Davie?s work (1994) as she discusses that one of the effect of secularisation is how society undergoes an observable, lifestyle change. She states how it has transformed ? from a culture of obligation or duty to a culture of consumption or choice? (Davie, 1994: ). Many Christians would attend church for a ?short period?to fulfil a particular rather than a general need in life..(and) ...read more.