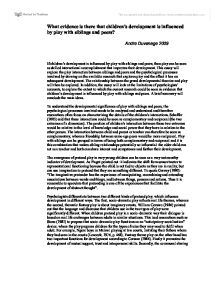 What evidence is there that children(TM)s development is influenced by play with siblings and peers?

become predominant. These studies therefore strongly suggest that the developmental improvement could be due to play because the play itself develops and becomes more intricate with age. By 16 years social life and friendships are independent of particular activities and a more obvious youth culture is evident. They also identified a specific break-time playground culture which adults are not a part of. Without the guidance of adults, children have to regulate their playground space and games, manage teasing, conflict and bullying and as a result they develop a more progressive and individual social understanding. "The other feature of friendship that is a key contributor to children's growing understanding of the social world is that it marks the beginning of a new independence from parents. Children,... grow up not in isolated nuclear families, but within a wider world of others, including children - sisters, brothers, playmates, loose-knit gangs of children. This world of other children means opportunities for friendship, enmities, gang life, leaders and followers. It means opportunities for working out the intricate balance of power and status between people, for sharing imaginative experiences, for understanding and manipulating the feelings and ideas of others, for a range of relationships that differ greatly from those of parents-with-children." (Dunn, 2004) When considering the developmental significance of children's playful interactions with siblings and peers, one could recognize two things according to Pelligrini (2003) ...read more.

Existing research is more focussed on the face to face interaction between children and this is not an accurate representation of children in especially affluent societies. Children communicate more and more through the internet and on mobile phones as a result of technology developing and this limits the scope of the research already done. Vital other areas still remain unexplored in this context. Furthermore, the account of peer and sibling interactions is mostly based on research conducted in Western industrialised settings. Therefore no conclusions can be made as to how the nature and extent of peer and sibling interactions are influenced by the specific social and cultural contexts within which the child is developing. The above research strongly suggests that children's development is significantly influenced by play with siblings and peers. Play interaction constitutes a powerful site for the development of especially social skills and understanding and consequent general development. From the research methods and accounts of psychologists that have been covered, it is clear that there are some issues concerning the evaluation of the research for validity and reliability due to a non-traditional approach. Some popular qualitative methods such as discourse analysis also needs more work on its theory and practice. These issues are minor because researchers are already taking them into account for example, by introducing concepts such as reflexivity. The existing empirical research that underpin the grand theories of development and its supporting relationship with the above studies mean that the qualitative research discussed can be taken as evidence that play with siblings and peers influence children's development. ...read more.