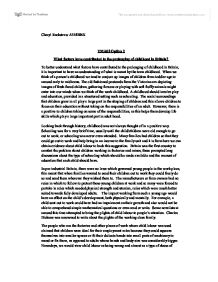 What factors have contributed to the prolonging of childhood in Britain?

Cheryl Rackstraw A338386X TMA03 Option 2 What factors have contributed to the prolonging of childhood in Britain? To better understand what factors have contributed to the prolonging of childhood in Britain, it is important to have an understanding of what is meant by the term childhood. When we think of a person's childhood we tend to conjure up images of children from toddler age to around early to mid teens. The old fashioned postcards from the Victorian era depicting images of fresh faced children, gathering flowers or playing with soft fluffy animals might enter into our minds when we think of the work childhood. A childhood should involve play and education, provided in a structured setting such as schooling. The social surroundings that children grow in all play a large part in the shaping of children and this allows children to focus on their education without taking on the responsibilities of an adult. However, there is a positive to children taking on some of the responsibilities, as this helps them develop life skills which play a large important part in adult hood. Looking back through history, childhood was not always thought of in a positive way. ...read more.

Many of the pupils who attended these schools could not believe that their working class equivalents lost their childhoods and arrived at adulthood on the very same day they began work, which was, for many, at a very young age. By the 1950s, children and most notably teenagers were not viewed by families as needing to contribute to the family economy; this resulted in changes being made within the parent/child family roles. Parents were now allowed to be seen as just that, parents. With children bringing in a wage to the family, they could have been viewed on as having a higher status within the family network. Children now rely upon their parents to provide for them and so allowing them to behave 'like children'. One of the reasons for the prolonging of childhood in Britain could be linked to the age range we use to define the 'child'. During the 1820s boys were considered for it to be okay to sweep chimneys after the age of ten because that was the age when childhood was supposed to have ended and yet just thirteen years later, this age range was raised to fourteen. ...read more.

The arrival of rights for children would also prolong their childhood as it helped children stay in school, on a compulsory measure, which kept them out of the work place. Childhood should be about balance, to learn responsibilities and respect for others whilst being allowed to make mistakes and learn from them along the path to adulthood, this path being vital for the child to become a well rounded adult. To be guided by adults who are prepared to show them the 'right paths' and for an education system to allow them to stay within the schooling system from an early age through adolescence and into early adulthood where it would be hoped they would continue their education into higher education factors such as college and university. The factors that will contribute to the prolonging of childhood in Britain will, as has in the past, constantly be changing over time, with new laws and guidelines to protect children. Childhood is essentially a creation of society and so society can depict what happens within it. 2000 Words. Reference List: British Parliamentary papers, 1968b, pg 52/Childhoods in Context, J. Maybin/M. Woodhead 2007. P. Gardener, The Lost Elementary Schools of Victorian England. Croom Helm 1984/Childhoods in Context, J. Maybin. M. Woodhead 2007 ...read more.