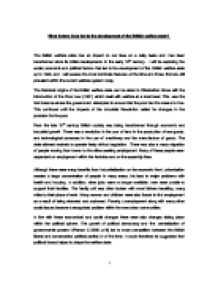 What factors have led to the development of the British welfare state?

What factors have led to the development of the British welfare state? The British welfare state has an impact on our lives on a daily basis and has been transformed since its initial developments in the early 19th century. I will be exploring the social, economic and political factors that led to the development of the British welfare state up to 1945, and I will assess the most dominate features at the time and those that are still prevalent within the current welfare system today. The historical origins of the British welfare state can be dated to Elizabethan times with the introduction of the Poor Law (1601) which dealt with welfare at a local level. This was the first instance where the government attempted to ensure that the poor had the means to live. This continued until the impacts of the Industrial Revolution called for changes in the provision for the poor. From the late 18th century British society was being transformed through economic and industrial growth. There was a revolution in the use of land in the production of raw goods, and technological advances in the use of machinery and the manufacture of goods. ...read more.

Individuals were expected to 'submit to degrading and shameful procedures to receive any benefit..thus only the completely destitute, would be prepared to come forward for help'(Blakemore.K 2003, p42). The workhouse was introduced to force people to work in order to receive their benefits. This transformed public attitudes to towards poverty, whereby being poor and dependant of benefits became shameful and those receiving support were increasingly stigmatized. Other laws were also passed such as the Factory Act (1883) which aimed to reform the working conditions of factory workers by 'legally enforcing a ten-hour day and rules governing the employment of children'(Alcock.C 2006,p19). This Act especially focused on women and children, and also enforced health and safety regulations, in addition, employers had to comply with educational classes for employees during the working day. At this point, it is evident that although state involvement was limited because of the dominant liberal principals of the time. Yet, there were the beginnings of a new beauracratic approach in state intervention. The Boer Wars (1880-1881,1899-1902) were fought between Britain and Holland as part of Britain's empire building mission. ...read more.

The Labour Government of 1945, were determined to eliminate poverty, ill health, and social deprivation. Their social and economic policies were driven by the party's own ideals and long-term objectives. William Beveridge was a government adviser to Winston Churchill. He filled his report and made recommendations about reforms to the provision of welfare. Beverigde based the principles of his report by seeking to 'establish a unified universal social insurance social system' (Thane.P 1996, p 232). This led to the introduction of many social security schemes including the National Insurance Act 1946 and the National Assistance Act 1948, which dealt with sickness and unemployment benefits and retirement pensions. These acts and reforms formed the basis for the welfare state that has been accomplished over time. From the early 18th century, there was a mixture of factors that lead to the development of the welfare state in Britain. These reforms and developments in welfare provision were a direct response to economic, political and social changes taking place at the time. Welfare reform persists to change today within its current framework, and continues to respond to these factors which are often interlinked and constantly shifting. ...read more.