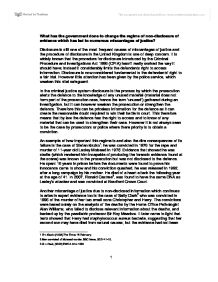 What has the government done to change the regime of non-disclosure of evidence which has led to numerous miscarriages of justice?

What has the government done to change the regime of non-disclosure of evidence which has led to numerous miscarriages of justice? Disclosure is still one of the most frequent causes of miscarriages of justice and the procedure of disclosure in the United Kingdom is one of deep concern. It is widely known that the procedure for disclosure introduced by the Criminal Procedure and investigations Act 1996 (CPIA) hasn't really worked the way it should have; instead it considerably limits the defendants right to access information. Disclosure is now considered fundamental to the defendants' right to a fair trial. However little attention has been given by the police service, which weaken this vital safeguard. In the criminal justice system disclosure is the process by which the prosecution alerts the defence to the knowledge of any unused material (material does not form part of the prosecution case, hence the term 'unused') gathered during an investigation, but it can however weaken the prosecution or strengthen the defence. Therefore this can be priceless information for the defence as it can create the reasonable doubt required to win their battle in court. This therefore means that by law the defence has the right to access and to know of any material that can be used to strengthen their case. ...read more.

However, the final report was much more understanding to the police point of view in terms of disclosure, and the government response was Criminal Procedure and Investigations Act 1996 (CPIA),8 which limited, the duty of disclosure on the prosecution. The Act also, for the first time, enforced a mutual duty on the defence. As a result, the defence was now under a statutory obligation to assist the prosecution by revealing the nature of their case in advance of the trial. The House of Lords stated in R v H and C9: "Fairness ordinarily requires that any material held by the prosecution which weakens its case or strengthens that of the defendant, if not relied on as part of its formal case against the defendant, should be disclosed to the defence. Bitter experience has shown that miscarriages of justice may occur where such material is withheld from disclosure. The golden rule is that full disclosure of such material should be made. " Therefore unused prosecution material will fail to be disclosed if, and only if, it satisfies the test for disclosure applicable to the proceedings in question. The relevant test for disclosure will depend on the date the criminal investigation inquiry started, as this will determine whether the common law disclosure regime applies, or either of the two disclosure regimes under the CPIA1996. ...read more.

In 1998 David Calvert Smith16 was appointed director of public prosecutions much of this documentation arose from a review of the procedures instigated by him. He also recognised the widespread concern over police and CPS performance in relation to disclosure and, made the decision to publish JOPI. In conclusion, major trials have collapsed at huge expense, defendants have had their cases dropped when a judge's patience with a failure to disclose evidence has finally come to an end, while those wrongly accused have, come very close to going on trial without knowing about crucial evidence that would secure their exoneration. The big worry, of course, are the cases where no one ever finds out about the exoneration statement sitting at the bottom of a police file; where the accused is convicted, locked up, but is innocent. The Government is now well aware of the problems; however, all the good intentions have led to lots of public announcements of aim but very little progress. It could all be sorted out in three easy stages, without legislation. First, the CPS needs to be told that it has to inspect the unused material itself, not just glance at the list produced by the police. Second, the CPS needs the extra funds to give it the time to do so. Third, the Government should, in the majority of cases, let defence lawyers go and look at whatever the police have got. ...read more.