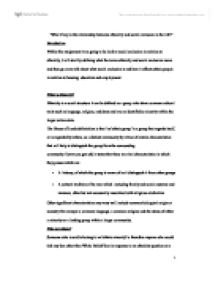 'What if any is the relationship between ethnicity and social exclusion in the UK?'

'What if any is the relationship between ethnicity and social exclusion in the UK?' Introduction Within this assignment I am going to be look at social exclusion in relation to ethnicity, I will start by defining what the terms ethnicity and social exclusion mean and then go on to talk about what social exclusion is and how it effects ethnic people in relation to housing, education and employment. What is ethnicity? Ethnicity is a social structure it can be defined as a group who share common cultural traits such as language, religion, and dress and are an identifiable minority within the larger nation-state. The House of Lords defininition is that 'an 'ethnic group' is a group that regards itself, or is regarded by others, as a distinct community by virtue of certain characteristics that will help to distinguish the group from the surrounding community.'(www.cre.gov.uk) it states that there are vital characteristics in which they posses which are: * A history, of which the group is aware of as it distinguish it from other groups * A cultural tradition of its own which including family and social customs and manners, often but not necessarily associated with religious celebration Other significant characteristics may very well include common biological origin or ancestry for example a common language, a common religion and the status of either a minority or a leading group within a larger community. ...read more.

based job seekers allowance, housing benefit and council tax benefit, as well as a rang of family and disability benefits such as child benefit and disability living allowance.' (Pierson, 2002, p205) 'Many ethnically differentiated people are immigrants or the descendants of recent immigrants' (Byrne, 1991, p90) and suffer greatly when it comes gaining employment Brine stated that 'at all occupational levels there is a real disadvantage for ethnic minorities as compared with 'whites' in their own occupational category' (byrne, 1991,p92) even though there are laws that are meant to prevent this kind of behaviour exclusion still exists within today's society and as the UK is a very musty ethnic society it is of great concern especially as'ethnic minorities currently make up 8 per cent of the UK population. Between 1999 and 2009, they will account for half the growth in the working age population.' (www.homeoffice.gov.uk) Not all minority groups experience the same type of social exclusion most ethnic minorities are less likely to find and sustain employment than their white counterparts and according to the national static's this disadvantage has persisted for more than a decade. It is clear that certain ethnic groups are being left behind, this becomes clear when looking at the employment rates and even those individuals who achieve academic success do not necessarily reap the rewards in the workplace that their qualifications desivers. ...read more.

(commission for racial equality, 2002) Another problem in which ethnic minorities face are being stopped by police, it has been reported by the bbc that 'African Caribbean's are six times more likely to be stopped and searched than white people.' (www.bbconline.co.uk) in relation to this they are 'at greater risk of experiencing crime overall than the white majority for the 2002/03' (www.homeoffice.gov.uk) according to the British crime survey 'The risk of racially motivated victimization was higher for people from black and minority ethnic backgrounds than for white people in general' (www.homeoffice.go.uk) Conclusion It is clear that people from ethnic minorities are some what social excluded as often people come to this country to seek refuges but are either have a delay in or are unable to access the service because of the language barrier which in turn isolates them making them less able to achieve good employment and be aware of what facilities are available to them. Although poverty is linked to social exclusion it is clear that not every one who is on the poverty line is social excluded, sometimes services are available but people from ethnic minorities do not feel that they are excluded from access these services. Reference Page.D, (2000), Building for communities, a study of new housing association estates Page.D, (2000), communities in the balance, rowntree foundation Somerville.P, Steele. A, (2002), Race, Housing and Social Exclusion, Jessica Kingsley Publishers Byrne. D, (2000), Social Exclusion, open university Pierson. J, (2002), Tackling social exclusion, routledge www.bbconline.co.uk http://www.emetaskforce.gov.uk http://www.statistics.gov.uk/) www.cre.gov.uk/index www.homeoffice.gov.uk http://www.cre.gov.uk/index.html Word count: 2,007 ?? ?? ?? ?? 1 ...read more.