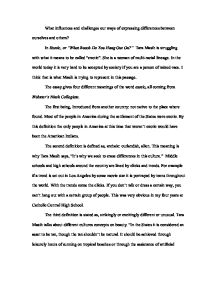 What influences and challenges our ways of expressing differences between ourselves and others?

What influences and challenges our ways of expressing differences between ourselves and others? In Exotic, or "What Beach Do You Hang Out On?" Tara Masih is struggling with what it means to be called "exotic". She is a woman of multi-racial lineage. In the world today it is very hard to be accepted by society if you are a person of mixed-race. I think that is what Masih is trying to represent in this passage. The essay gives four different meanings of the word exotic, all coming from Webster's Ninth Collegiate. The first being, Introduced from another country: not native to the place where found. ...read more.

The third definition is stated as, strikingly or excitingly different or unusual. Tara Masih talks about different cultures concepts on beauty. "In the States it is considered an asset to be tan, though the tan shouldn't be natural. It should be achieved through leisurely hours of sunning on tropical beaches or through the assistance of artificial means." How true that statement is. I know several people who go tanning at least once every other day. They live to tan. They love being tanner than other people. Last but not least, the final meaning of the word exotic is, of or relating to striptease. This meaning gives sexual connotations to foreign-looking woman. ...read more.

The third definition also illustrates how the unfamiliar can be frightening even though it's exciting. Finally, in the last definition she describes Visions of Salome. She does this to express the fear of what is deferent, or in this case, the fear of woman. I believe the four definitions listed above have a lot to do with why some people of foreign decent abandon the manifestations of their heritage. I think many of the reasons lie within the second definition about alienation. I feel that people will do just about anything to fit in. People don't like to be different especially in the United States. This country is a trendy one where fashions are set and followed by just about everyone. Nobody likes to be an outcast. This is why many people of foreign decent abandon their ways of life. ...read more.