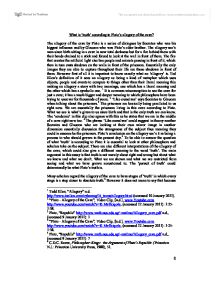 What is truth according to Platos allegory of the cave?

What is 'truth' according to Plato's allegory of the cave? The allegory of the cave by Plato is a series of dialogues by Socrates who was his biggest influence and by Glaucon who was Plato's older brother. The allegory see's men since birth sitting in a cave in near total darkness but for a fire behind them with their heads chained to a stick and forced to look at the wall in front of them. The fire that creates the artificial light also has people and animals passing in front of it, which then in turn casts shadows on the walls in front of the prisoners. Essentially the only images they are able to capture throughout their life are these shadows in front of them. However first of all it is important to know exactly what an 'allegory' is. Ted Ellen's definition of it sees an allegory as being a kind of metaphor which uses objects, people and events to compare to things other than their literal meaning this making an allegory a story with two meanings; one which has a literal meaning and the other which has a symbolic one. 1 It is common misconception to see the cave for just a cave; it has a much bigger and deeper meaning to which philosophers have been trying to uncover for thousands of years. ...read more.

10 Because he never saw it happening to him he lived a life of ruthlessness and self-interest. A life that was lived by what others expected from him. He eventually reflects upon this and begins to understand that the more successful he got the more unhappy he felt. He begins to look at himself in a new light and ponders on how he could have lived a different and maybe more productive happier life. He thus begins to feel sorrow for those in the life he will be leaving; his family, friends and colleagues as they will be left in a world full of artificialness. Whilst Ivan's family is battling over their inheritance he is just happy that he realised there is more to life than material possessions and what is expected of them form society. This is why he dies in a feeling of euphoria knowing he has excelled on his journey to truth. 11 There is also an ancient legend about two passionate male lovers in 2500 B.C. of Gilgamesh and Enkidu.12 Gilgamesh was a ruler of great city who didn't care much for his position, as he was deeply involved in love affairs with numerous women. The Gods one day decided to give Gilgamesh a companion that would distract him and give him the love he has been craving for such a long time. ...read more.

But we are able to have our own opinions on what truth is even with our possibly limited capacity. This theory could also be worked around Plato's allegory of the cave. But whilst Plato thought that there were human beings that could advance out of the cave, we could as a human race be stuck in the middle with no one in the history of the earth ever advancing further. In conclusion to my research the judgement I have reached when tackling the question of what is truth according to Plato's allegory of the cave is; that truth is objective and based up on fact according to him. Although Nietzsche argued that untruth could be better than truth making untruth true to those who benefit from it. Plato's argument overlooks this analysis. The stages Plato outlines in his allegory of the cave each a step closer to sunlight meaning that there is a gradual build up to the truth. This is in a sense can be seen as a 'pursuit'. The truth exists according to Plato however it needs to be fought for and desired. And in order to be able to know to desire it a life changing event or the experience of an epiphany needs to happen. What we see in front of us is what he believes to be only partial truth. Only once we exit the cave we can see what truth really is. And it is still disputable to whether anyone in the history of the earth really has stepped out of the cave. ...read more.