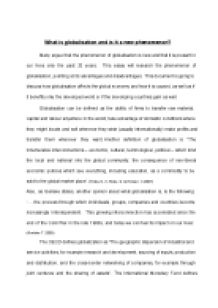 What is globalisation and is it a new phenomenon?

﻿What is globalisation and is it a new phenomenon? Many argue that the phenomenon of globalisation is new and that it is present in our lives only the past 20 years. This essay will research the phenomenon of globalisation, pointing at its advantages and disadvantages. This document is going to discuss how globalisation affects the global economy and how it is caused, as well as if it benefits only the developed world or if the developing countries gain as well. Globalisation can be defined as the ability of firms to transfer raw material, capital and labour anywhere in the world, take advantage of domestic conditions where they might locate and sell wherever they wish (usually internationally) make profits and transfer them wherever they want. Another definition of globalisation is ??The innumerable interconnections ? economic, cultural, technological, political ? which bind the local and national into the global community; the consequence of neo-liberal economic policies which see everything, including education, as a commodity to be sold to the global market place?. (Hicks D, in Hicks, D. & Holden, C.2007) Also, as Garlake states, another opinion about what globalisation is, is the following: ??..the process through which individuals, groups, companies and countries become increasingly interdependent. ...read more.

Another trading block is NAFTA, which is the North America Free Trade Agreement that takes place between the government of Canada, Mexico and the United States. In conclusion, the main idea of globalisation is that trade is becoming more and more open between countries and barriers to entry are constantly decreasing. Finally the overall conclusion of the essay is that globalisation is not a new phenomenon even though some believe that it is, because of the fact that it is more popular in the last 20 years due to technological advances. Globalisation will continue in the near future as countries like China and India are the new big powers and they will continue to increase the export of goods and services. Now as the UK is concerned, it is certainly a country that is playing a big part in the process of globalisation since is the centre of all business transactions especially in the European Union. Reference List Brah, Avtar (1999). Global Futures Migration, Environment and Globalisation Coate, Roger (1982). Global Issue Regimes, USA, Praeger Garlake T. (2003) ?The Challenge of Globalisation: a handbook for teachers of 11-16 year olds?. Oxford, Oxfam Hambleton, Robin (2002). Globalism and Local Democracy, Great Britain, Palgrave Hicks D, in Hicks, D. & Holden, C. (2007) Teaching the Global Dimension, London, Routledge http://www.ustr.gov/trade-agreements/free-trade-agreements/north-american-free-trade-agreement-nafta ...read more.