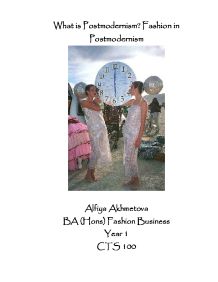 Hence the motto for postmodern politics might well be "think globally, act locally"--and don't worry about any grand scheme or master plan." (http://www.dilibrary.net An Introductory Guide to Post-Structuralism and Postmodernism) Postmodern Fashion The emphasis on the dress code and style is seen as the most distinctive features of visual culture in the postmodern societies. The wide range of quality fabrics, trims, colours, silhouettes, etc reflect the openness and fragmentation in the history of post-Enlightenment Western clothing conferences. And, to mention the fashion system, where articulated rules and codes, which are opposite to innovation, revolt and pluralization take place. Within the field of cultural studies these and related propositions are illustrated most memorably in Dick Hebdige's classic book, Subculture: The Meaning of Style, which charts the differing styles during the 1960s and 70s of teddy boys, mods, skinheads, Rastas, and especially punks in relation to the historical conjuncture of mainstream culture. Subculture: The Meaning of Style In postmodern societies, youngsters usually associate and link their styles with music, dance and pop culture, which sometimes can create shocking ensembles that are seen against the mainstream order; these styles usually send a message of a rejection and rebelliousness. Innovation in fashion is less a matter of creativity out of nothing than of mutation and pastiche. Punk fashion, with its torn tee shirts, orange hair, safety pin piercing, necklaces of toilet chains, and mask-like male-up, effectively demonstrates not only the simultaneous systematicity and disorganization of late twentieth-century dress-codes, but also the heteroglot visual culture characteristics of postmodern social regimes. ...read more.

Punk has even taken more than one turn at being an inspiration to haute couture. In the 21st Century, punk and hip-hop, another subcultural style born of strife, have been fused together into what has become the standard look for contemporary youth. SUMMARY So what is postmodernism? This is, once again, a very difficult question, and there is not a one answer to it, because in many ways this term is a misnomer. Many postmodern philosophers and sociologists still refuse to accept this label. And even if there are a small number of postmodernists who accept it, there is a huge diversity in their view and approaches. And as to postmodern fashion, fashion is more than a matter of personal attitude, posturing, clothing design and haute couture. It impacts collectivities both First and Third World, urbanized and rusticated, disorganized and not. It is part of the contemporary aestheticization of everyday life. The images circulating through fashion media numbingly repeat beautiful but destructive stereotypes, norms, ideas and views, producing alienated identification, anxiety, contradiction and envy. The boundaries between the high-art of haute couture and the low-art of the high street, a test of postmodernity in other mediums, have been broken down. You can dress like your mum, your daughter or your boyfriend all at the same time, and it would be accepted as normal. So, our fashion culture has been condemned to eternal postmodernism in endless season of rehash and replication. It is a license to do and wear whatever you want - which is a rare freedom. ...read more.