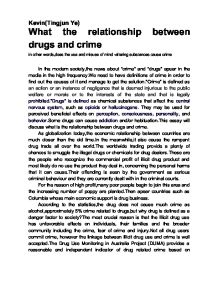 What the relationship between drugs and crime?

Kevin(Tingjun Ye) What the relationship between drugs and crime in other words,does the use and misuse of mind-altering substances cause crime In the modern society,the news about "crime" and "drugs" apear in the media in the high frequency.We need to have definitions of crime in order to find out the causes of it and manage to get the solution."Crime" is defined as an action or an instance of negligence that is deemed injurious to the public welfare or morals or to the interests of the state and that is legally prohibited."Drugs" is defined as chemical substances that affect the central nervous system, such as opioids or hallucinogens. They may be used for perceived beneficial effects on perception, consciousness, personality, and behavior.Some drugs can cause addiction and/or habituation.This essay will discuss what is the relationship between drugs and crime. As globalization today,the economic relationship between countries are much closer than the old time.In the meanwhile,it also cause the rampant drug trade all over the world.The worldwide trading provide a plenty of chances to smuggle the illegal drugs or chemicals for drug dealers.These are the people who recognize the commercial ...read more.

can in turn lead to crime, can result in alienation from the wider community.The person who addicted in drugs would pay for the drugs continuously,so the poor people would easily run out of money and have to find other ways to get the drug money.Generally,the solution is crime such as robbery.In a recent Australian study of drugs users, 44% reported an act of violence after use, 39% had been involved in violence previously, but 33% of violence first occurred after such use (Loxley and Bevan, 1998). Then they would get caught by police and be put in jail or drug rehabilitation center for years.It is obvious that the prison life is boring,so the drugs are the most popular things for prisoner in order to kill time.Research shows high rates of drug use in prison.For instance,a NSW study of prisoners found that 58.2 per cent reported drug use (excluding tobacco and their own prescription medications, but including alcohol) on at least one occasion during their current term of imprisonment.When the criminal released,they are still drugster with no living skills,so they have to restart their business.That is a vicious circle. ...read more.