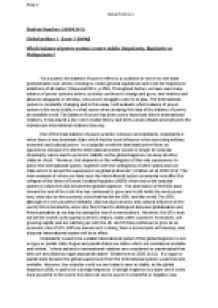 Which balance of power system is more stable: Unipolarity, Bipolarity or Multipolarity?

Liberalism believes that in a bipolar world, because there are two states trying to get ahead of one another it results in dilemmas such as the security dilemma and arms races, this according to liberals creates an unstable international system because there is constant rivalry and tension. Liberals believe states should work together in order to achieve absolute gains from working together rather than trying to enhance their relative power. There may be a possibility of a bipolar world in the future; with china rising fast we could see a balance of power between the USA and China. China?s economy has being growing exponentially for almost 30 years however some evidence has been put forward that says china may not overtake the US after all. Prime Minister Li Keqiang was quoted in an article written by the telegraph saying that he ?asked the State Council to clamp down on the excesses of the regions?.A top regulator says local government finances are ?out of control?. Mr Li aims to cut China's economic growth to a safe speed limit of 7pc next year and rein in rampant investment ? still a world record 49pc of GDP ? before it traps the country in a boom-bust dynamic of frightening scale?(Evans-Pritchard 2013). ...read more.

Multipolarity creates an even division of power in which all states can keep checks on each other, and also with the growing amount of states joining international organisations (IGO?s) it becomes impossible for some states and alliances to go to war and even more so unthinkable to wage war in today?s international system. However, no balance of power system is without its flaws, with the predictions of war and chaos in the future, once vital resources start to dwindle who?s to say any balance of power system will be considered stable or if the concept of the balance of power will remain relevant in global politics. Word Count: 2006 Reference List Andrew Heywood, Global Politics, (Basingstoke: Palgrave Macmillan, 2011) Andrew Watters, Roger Marston, and David Cleaver, Global Politics, (Stocksfield: Anforme Ltd, 2008), chap.5, 6, 10 "BRICS key element of emerging multipolar world ? Putin."Russia Today, sec. News, March 22, 2013. http://rt.com/news/brics-multipolar-world-putin-635/ Evans-Pritchard, Ambrose. "China may not overtake America this century after all." The Telegraph, sec. Finance, May 08, 2013. http://www.telegraph.co.uk/finance/comment/10044456/China-may-not-overtake-America-this-century-after-all.html. Humphreys, Adam R C, 2013,International Politics, 50, 6, 863-879(17) [Peer Reviewed Journal] published online 20 September, 2013 Mingst, Karen. A, and Arreguin, Toft. -W.W.Norton&Company, Inc., "Essentials of International Relations." Last modified: 2010. http://www.wwnorton.com/college/polisci/essentials-of-international-relations5/ch/04/summary.aspx ...read more.