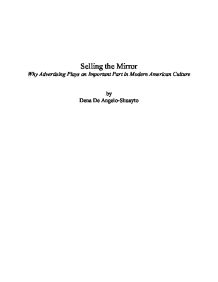 Why Advertising Plays an Important Part in Modern American Culture.

Selling the Mirror Why Advertising Plays an Important Part in Modern American Culture by Dena De Angelo-Shuayto Introduction Advertising is all around us. Sometimes we notice it and sometimes we do not. It can be as blatant as a 30-second spot on the Super Bowl, or as innocuous as a Nike logo on a hat. Yet, is it more than just marketing? Do the subliminal messages planted in our minds stop at the cash register or has something deeper happened between Madison Avenue and Main Street? Does advertising effect us in some profound way that goes unnoticed, permeating our psyches in ways we take for granted? Or, in a worse case, become oblivious to? Advertising has shown it has the power to define our choices, from which brand of toothpaste to buy, to which governor to vote for. Those choices are inextricably woven into our everyday lives, making up, over time and by further homogenization, facets of our culture that are uniquely American. In many respects we have become a culture of consumers. As a result, advertising has played and continues to play an important part in modern American culture. In order to support the above statement, the term culture must first be explained in the context of the following presented arguments. Culture can be defined as "the integrated pattern of human knowledge, belief, and behavior that depends upon man's capacity for learning and transmitting knowledge to succeeding generations" (Merriam-Webster's Collegiate Dictionary Online, keyword culture). In addition, it is the "totality of socially transmitted behavior patterns, arts, beliefs, institutions, and all other products of human work and thought" (dictionary.com, keyword, culture). ...read more.

Without a profitable return on investment (ROI), advertising campaigns are scraped faster than you can say "Rodney Allen Rippey". Some of the most expensive ad campaigns to date involve the use of celebrity endorsements, promoting everything from Jell-O? to batteries. It is estimated that more than 20% of all TV commercials feature celebrities with advertisers paying more than $500 million per year for their services (Belch & Belch, pg. 232). So, how is this relevant to our culture at large? Because so much of what determines the success of a campaign relies on the cultural significance and consequence of using that particular celebrity at that particular juncture in our society (ergo, culture). Celebrity endorsements seldom are random events. Celebrities must be considered for their congruity with the brand and personal characteristics. The attributes they bring to the table need to maximize communications not overshadow a product or service. The goal is to remember what they were selling, despite the belly baring and body slamming. And most importantly they need to be credible. If we are confident and believe a celebrity's claim about a product or service, then we are wont to buy into what they are selling. Even stronger are celebrities with incredible mass appeal: Michael Jordan for Gatorade, Michael Jackson, Madonna and Brittany Spear for Pepsi, and most recently, Spiderman for everything from Cingular Wireless to PopTarts?. Yes, even fictional comic book heroes, taken directly out of the pages of pop culture are being signed and delivered via endorsement deals as sugar-coated as the cereal box that bears their likeness. The recent release of the new Spiderman movie had an opening weekend of over $114 million dollars, the largest to date. ...read more.

so make her happier this Christmas" (LIFE, pg. 137). The headlines have changed over the years, yet they still remain small tokens of how we measure worth and success. Conclusion Like opening a time capsule, one might be able to infer many of our idiosyncrasies and buying habits just by skimming the ads in a single issue of LOOK or LIFE magazine. Our culture was distilled down to simple visuals and a few key words whose lasting impact defies the most logical of explanations. From the specter of nuclear war conveyed in President Lyndon Johnson's famous 1964 "Daisy Girl" commercial, to the durability of the Golden Arches, Americans began to experience the power of brand as precursor to the coming Information Age. The culture we see around us today has largely been built by a marketing machine that thrives on branding almost every visible space of real estate. From Coke? and Pepsi? in the halls of our schools, to the latest blockbuster movie tie-in, we are, at best, pushing our own limits of information overload. Marshall McLuhan's "medium" has seemingly become both infinite and indefatigable. Marshall McLuhan's seminal work on mass media, developed during his career as an educator and communications theorist, brought phrases such as "global village" and "the medium is the message" into the vernacular of everyday life. In closing, his following quote sums up advertising's influence on our culture succinctly, requiring no further comment. Historians and archeologists will one day discover that the ads of our time are the richest and most faithful daily reflections any society ever made of it's whole range of activities. ...read more.