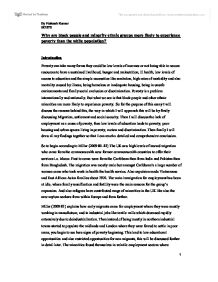 Why are black people and minority ethnic groups more likely to experience poverty than the white population?

Why are black people and minority ethnic groups more likely to experience poverty than the white population? Introduction Poverty can take many forms they could be low levels of incomes or not being able to secure resources to have a sustained livelihood, hunger and malnutrition, ill health, low levels of access to education and the simple necessities like sanitation, high rates of morbidity and also mortality caused by illness, being homeless or inadequate housing, being in unsafe environments and finally social exclusion or discrimination. Poverty is a problem internationally and nationally. But what we see is that black people and other ethnic minorities are more likely to experience poverty. So for the purpose of this essay I will discuss the reasons behind this, the way in which I will approach this will be by firstly discussing Migration, settlement and social security. Then I will discuss the lack of employment as a cause of poverty, then low levels of education leads to poverty, poor housing and urban spaces living in poverty, racism and discrimination. Then finally I will draw all my findings together so that I can reach a detailed and comprehensive conclusion. So to begin according to Millar (2009:80-81) The UK saw high levels of inward migration who came from the commonwealth now former commonwealth countries to offer their services i.e. labour. First to come were from the Caribbean then from India and Pakistan then from Bangladesh. ...read more.

But when it comes to degrees these groups are doing better. Now moving onto employment according to Mason (2000:55) there are a many explanations to why ethnic minority groups are disadvantaged in the labour market some of the main reasons given are that the problem lies in the character of the minority group job seekers. Another reason given is that of the language, employers say that there is a communication barrier that accounts for low levels of employment; there is also evidence for this which explains that difficulties in the labour market can be a cause of poor English. But this cannot be the all totalising cause because the ethnic minorities that are born and educated here can speak the language. Also another cause given is that ethnic minorities do not have skills and qualifications that their white counterparts have or to the same level, this is said to be due to an underachievement in education. Also that when they do posses the same qualifications they are given lower level jobs, there is also a strong claim that ethnic minority people do not have the same networks and community knowledge needed in job seeking. These all lead to the premise that discrimination is involved. Housing is a key issue and according to Mason (2003:107) there are considerable differences between all the different minority ethnic communities in housing, there are various tenure patterns, different dwelling types, settlement geographies and density of occupation. ...read more.

Then poor housing can result in poverty too as overcrowding, low incomes, limited housing choices, poor health and limited outward movement is key determinant of poverty. Then finally racism which all minorities face this discrimination can be found to influence all other reasons that I have given it is the underlying cause that I believe to be the problem, it is the discrimination that plays a part amongst others in making minorities live together in communities and in poor housing because they would be subjected to discrimination If they lived near them. It is also in my opinion that discrimination makes certain ethnic minority groups such as Caribbean males underachieve in education but you could say that it is the male's quest for their masculinity that causes this but I believe that this too is rooted in discrimination in their histories. Also it is discrimination that is the reason for the proportion of jobs that are not given to minorities even though they pose the right levels of qualification. In the modern day discrimination is not openly seen but it is felt by minorities so making it hard to address, there has been work done by governments and agencies but much more is to be done. If the root of poverty stems from discrimination then it is plausible to say an end to discrimination is the key to alleviating poverty. ...read more.

This essay aimed to discuss the reasons why black and minority ethnic (BME) people are more likely to experience poverty. There is lots of potential for a strong essay, but there are several areas for improvement. Firstly the writer has not identified where their viewpoint originates. Is it from personal experience or has it been confirmed via research? Next, key areas that may cause poverty were discussed by at times, not in enough depth or with enough clarity, the latter, mainly due to poor grammar. At degree level such grammar errors would not be expected.
Lastly, there are huge generalisations made (as noted on page 5), which is not in keeping with the social work values of being non-judgemental and engaging in anti-oppressive practice. These values should be borne in mind when writing essays on such emotive topics.
2/5