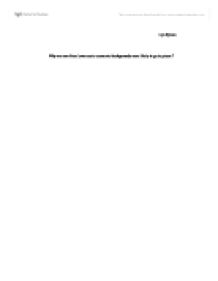 Why are men from lower socio-economic backgrounds more likely to go to prison ?

Lyn Symes Why are men from lower socio-economic backgrounds more likely to go to prison ? In society people have always been categorised in accordance to their wealth, lifestyle and income and in the past this was by categorising them into classes, the upper, the middle and the working class. Today, people from lower socio-economic groups would have been known as the working class in the past. In order to look at why men from this class/socio-economic group are imprisoned more than other classes/groups we firstly need to look at whom these people are. Britain's original working class came about in the late 18th and early 19th century - the world's first industrial class: Britain was the first industrial nation. In the first half of the 19th century around 80 per cent of the population was living in rural areas but because the industrial revolution came about by the end of the century 80 per cent were now living in towns and cities. The countryside had now become desolated whilst towns and cities continued to expand with their many industries. Mines, docks and factories attracted workers who were wanting to escape from rural poverty into better paid jobs, living standards and more permanent and regular work. At first, many workers found it difficult to convert from 'green' labour to industrial work as this included long hours because of this working class schooling was changed so that children could be accustomed to the new industrial work routine. In time though, the workforces settled and industrial and urban cultures started to develop around Britain. Large enterprises employed hundreds of workers with the work often being highly dangerous especially in the steel works and mines. Because of this workers had to be cooperative in order to do their jobs and they often depended on each other for physical safety and this is believed to be where the working class partnership (the us versus them ideology) ...read more.

There is believed to be a 'cycle of poverty' whereby children are born into poverty and suffer in their early years from poor nutrition and housing and this then leads to poor health meaning that their school attendance is likely to be poor. Which can then lead to few qualifications and skills and onto low paid and often unpleasant and casual work which may lead many into petty theft which gains them a criminal record and sometimes imprisonment and unemployment which then makes them dependent on benefits and often results in teenage pregnancy and so again the cycle restarts with another child being born into poverty. The government also now has a zero tolerance on benefit fraud meaning that the people committing can face prison if there are found out. This means that they're targeting poor people and a lot of the time the people committing benefit fraud actually need the money and are desperate, and if they are found out they are then given a criminal record which makes it a lot harder for them to find work and so can lead them into a serious life of crime. This is they're latest plea to the public: Every year we estimate that benefit cheats cost around �2 billion in stolen benefits. They are taking public money from people who really need it. The total cost of this fraud is equivalent to �80 a year from each family in Great Britain. The Department for Work and Pensions is taking positive action to: � emphasise that benefit fraud is a serious problem and will not be tolerated � make it harder to commit benefit fraud � detect more benefit fraud � stop those who might be thinking of committing benefit fraud, and � encourage people to report those who are committing benefit fraud. Source: Department for work and Pensions. Yet, they fail to mention how much tax fraud costs us each year..... ...read more.

Even though it may seem as though the middle class commit as much crime as the working class they are not sent to prison for it a lot of the time. This is mainly due to a lot of the crimes they commit to be non-utilitarian and so people are not aware that a crime has been committed. The middle classes are not targeted by the police and so are less likely to be caught out in that respect. With regards to tax fraud in comparison to benefit fraud tax fraud is very hard to prove and a lot of the time the agents looking into the matter do not have the time or money to look thoroughly where as benefit fraud is easy to spot and they tend to be targeted more and so are more likely to be caught. Also if businesses, particularly banks, do find that a crime has been committed by an employee they tend to sack the employee rather than press criminal charges due the embarrassment it would cause the employers. Therefore the middle class are less likely to be caught and even if they are, they are less likely to go to prison. Having considered aspects of criminality amongst men from lower socio-economic backgrounds and the higher incidence of their likelihood to be caught and sent to prison, we can see that there are no dominant causal factors. Research appears to have focused on narrow frameworks looking for a single dominant cause. This has not been proven to be the case although this has been exploited from a political stance. It has been shown that middle class crime is less easier to detect and even when detected there is a less likelihood of imprisonment. From this it is possible to conclude that society feels 'safer' in being presented with figures that support a view that criminality tends towards a group that can be put into a box that can be managed i.e. men from lower socio-economic backgrounds. ...read more.