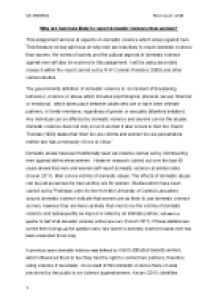 Why are men less likely to report domestic violence than women?

Connell (2002) also states that men receive much more emotional support from women without having the social obligation to reciprocate. Therefore due to this there is a taboo on the free expressions of emotions in males, especially vulnerability. This makes it harder for men to be able to report domestic violence or to confide in family and friends Generally speaking, men do not integrate themselves to others by talking about their feelings and this also makes it harder for them to confide in orders regarding being victims of domestic abuse (Connell 2002). Men are not known to confide in other male friends, family or colleagues due to the fear of being mocked, and there sense of pride being dented, leaving them with emotional and psychological pain as well as physical (Pandora 2009) Often men are not able identify that they are victims of domestic violence or criminal assault, and as a result are unfortunately unlikely to be able to seek help (Pandora 2009). Social prejudice will also contribute to why males are less likely to report domestic abuse than women. Men find it more difficult than women to let other people know that they are in fact victims of domestic abuse and to ask for or to seek help. ...read more.

Therefore more publicity needs to be made on domestic violence against men to enable them to report abuse that they may be suffering without suffering the extra pressure of how society perceives them ( Pandora 2009) This assignment has explored and discussed domestic violence which arises against men. This essay has focused on why men are less likely to report domestic violence than women, the norms of society and the cultural aspects of domestic violence against men has also been explored in this assignment. I have used secondary research within this report carried out by R.W Connell, Pandora (2009) Referencing Gelles, R. J, (1997) Intimate Violence and Families, 3rd Ed, Thousand Oaks: Sage Publications California Kevan, N. (2011) The invisible domestic violence ? against men. [Online] Available at: http://www.guardian.co.uk/commentisfree/2011/jun/07/feminism-domestic-violence-men [Accessed: 28.4.12] Mankind Initiative (2012) WHAT IS DOMESTIC ABUSE? [Online] Available at: http://www.mankind.org.uk [Accessed: 28.4.12]. Pandora, K. (2009) The Hidden Side of Domestic Violence: Men Abuse in Intimate Relationships. [online] Available at: http://www.pandys.org/articles/maledomesticviolence.html [Accessed: 28.4.12]. R.W. Connell, R.C (2002) Masculinities, 2nd Ed, University of California press Shelter (2012) Domestic abuse against men. [Online] Available at: http://england.shelter.org.uk/get_advice/families_and_relationships/domestic_abuse/domestic_abuse_against_men [Accessed: 28.4.12]. Straus, M. A., & Gelles, R. J. (1990). Physical violence in American families: Risk factors and adaptations to violence in 8,145 families. New Brunswick, NJ: Transaction. Thomas, D. (1993). Not guilty: The case in defence of men. New York: William Morrow and Company ...read more.