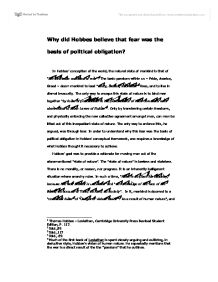 Why did Hobbes believe that fear was the basis of political obligation?

Why did Hobbes believe that fear was the basis of political obligation? In Hobbes' conception of the world, the natural state of mankind is that of "the miserable condition of war"1. The basic passions within us - Pride, Avarice, Greed - doom mankind to lead "nasty, brutish, and short"2 lives, and to live in dismal insecurity. The only way to escape this state of nature is to bind men together "by feare of punishment to the performance of their covenants and observation of those Lawes of Nature"3. Only by transferring certain freedoms, and physically enforcing the new collective agreement amongst men, can man be lifted out of this inexpedient state of nature. The only way to enforce this, he argued, was through fear. In order to understand why this fear was the basis of political obligation in Hobbes' conceptual framework, one requires a knowledge of what Hobbes thought it necessary to achieve. Hobbes' goal was to provide a rationale for moving man out of the aforementioned "state of nature". The "state of nature" is lawless and stateless. There is no morality, or reason, nor progress. It is an inherently belligerent situation where anarchy rules. In such a time, "there is no place for Industry, because the fruit thereof is uncertain" and "no Knowledge of the face of the Earth; no account of Time; no Arts; no Society". In it, mankind is doomed to a "continuall feare" of "danger of violent death"4. ...read more.

the motivation for breaking the state of nature is a somewhat unclear issue in Leviathan. In Hobbes' conception of things, as our principal concern is our own preservation, attempting to forgoe this obligation would be irrational and against nature as doing so would endanger our own existence. It is important to remember that in Hobbes' view, the only motivating factor and right that man will have is self-preservation - there is no concept of utility, or utility maximisation. To talk about utility-maximisation in the positivist conception of the term is inherently misleading.21 The only reason to break the social contract is if one believed that one's survival depended upon breaking it. Despite this, when he intermittently discusses "the pursuers of Wealth, Command, or sensuall Pleasure"22 it would not be unreasonable to assume that Hobbes may have recognised that men would wish to break the basic social contract for their own personal gain. Nevertheless, Hobbes repeatedly states than men can not be simply expected to promise to keep to the contract on the basis of mere words. And if men are expected to, then the contract is axiomatically void. For the person that fulfills his side of the contract has no assurance that the other will do the same, which renders the contract void. Put simply, "bonds of words are too weak to bridle men's ambition, avarice, anger, and other passions"23. ...read more.

The image of the Leviathan on Leviathan's fronitpiece provides an apt metaphor for understanding Hobbes' conception. In it, the towering figure is a collective entity constituted of both the masses who make up the body - the force and might behind the Leviathan - and the sovereign represented as the head, who thinks for and commands the collective force of the body. Everyone agrees 'to submit their wills, everyone to his will, and their judgments, to his judgment'.31 An additional, and rather important benefit, of the creation of the Leviathan is the reduction and near elimination of conflict. According to Hobbes, all conflict is a conflict of belief.32 Principally, this conflict of belief is rooting in the need for surival - of whether or not someone poses a threat to my existence, of whether or not I need a resource more than someone else to survive. Nevertheless, all beliefs that might be the basis of conflict are inadequately founded33 - as the very fact that that there is disagreement shows. Men are to renouce the state of nature by renouncing their right to all things - their own private judgement about what conduced to their preservation. In conclusion, we can see that in order to lift man from the state of nature, there is no alternative but to use fear, vested in the Leviathan, to force men to keep to their social contract. Without this, men would be unwise to expect other men to adhere to it, and be foolish to adhere to it themselves. ...read more.