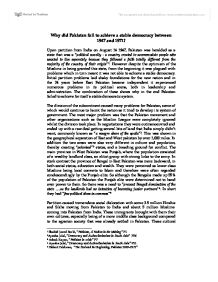 Why did Pakistan fail to achieve a stable democracy between 1947 and 1971?

Why did Pakistan fail to achieve a stable democracy between 1947 and 1971? Upon partition from India on August 14 1947, Pakistan was heralded as a state that was a "political novelty - a country created to accommodate people who wanted to live separately because they followed a faith totally different from the majority of the country of their origin"1. However despite the optimism of the Muslims in being granted this state, from the beginning it was plagued with problems which in turn meant it was not able to achieve a stable democracy. Initial partition problems laid shaky foundations for the new nation and in the 24 years before East Pakistan became independent it experienced numerous problems in its political arena, both in leadership and administration. The combination of these shows why in the end Pakistan failed to achieve for itself a stable democratic system. The division of the subcontinent caused many problems for Pakistan, some of which would continue to haunt the nation as it tried to develop its system of government. The most major problem was that the Pakistan movement and other organisations such as the Muslim League were completely ignored whilst the division took place. ...read more.

Many argued that he was incompetent at his job and in 1951 when he was assassinated a Bengali, Khwaja Nazimuddin became Prime Minister in his stead. Pakistan's third governor at that time was Ghulam Mohammed, a hardened bureaucrat with "no appetite for democratic practises"12, and in close contact with the military he dismissed Nazimuddin and later on, in October 1954, the constituent assembly also, (when it tried to curb some of his powers). So within the first years of independence, there was lack of strong democratic leadership. Every few years the leadership changed and by 1958, there had been seven prime ministers. So this period was characterised by great uncertainty as politicians engaged in "continuous power struggles"13, their goal being "self perpetuation and plunder"14 rather than service to the "the suffering Pakistani masses"15. Democracy was also hindered by delays in establishing a constitution because of fierce debate over whether "Pakistan should adopt an Islamic or secular form of government"16 and also East Pakistan's annoyance over its under-representation in the non-elective institutions. The concept of parliament soon lost all credibility in Pakistan as it seemed incompetent, unrepresentative and the executives often tended to bypass it and rule by ordinance. ...read more.

So given the amount of internal conflict, there was no room for democracy to be established. After Yahya gave up power, it could be said by looking at Bhutto taking power after that, that democracy had finally won through. The PPP was the largest party in Pakistan, and was now in leadership due to a fair, free election which they had fairly won. However this shift from "military-bureaucratic authoritarianism to parliamentary democracy"28 didn't last very long as after Bhutto another military regime was established, via a coup d'etat in 1977 under General Muhammad Zia-ul-Hag. So sadly the regime still hasn't been able to achieve a stable democracy even today. There were hints of democracy from 1947-51 as some aspects of some of the different dictators regimes showed. However overall Pakistan's history has been a most turbulent one, "producing anything but a participatory democracy"29 where men have lusted after power for their own purposes and the people have suffered without a say in how their country is run. As Kapur put it "they had not been groomed in the nursery of democracy and in the ideas of individual freedom, liberty and nationalism"30. Subsequently because of this fact, the country did and will find problems in developing fully. ...read more.