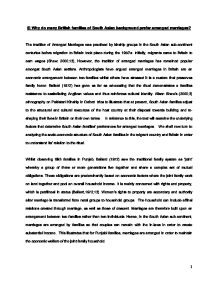 Why do many British families of South Asian background prefer arranged marriages?

5) Why do many British families of South Asian background prefer arranged marriages? The tradition of Arranged Marriages was practiced by kinship groups in the South Asian sub-continent centuries before migration to Britain took place during the 1950's. Initially, migrants came to Britain to earn wages (Shaw; 2000;13), However, the tradition of arranged marriages has remained popular amongst South Asian settlers. Anthropologists have argued arranged marriages in Britain are an economic arrangement between two families whilst others have stressed it is a custom that preserves family honor. Ballard (1972) has gone as far as advocating that the ritual demonstrates a families resistance to assimilating Anglican values and thus reinforces cultural identity. Alison Shaw's (2000;3) ethnography on Pakistani Kinship in Oxford tries to illustrate that at present, South Asian families adjust to the structural and cultural resources of the host country at their disposal towards building and re-shaping their lives in Britain on their own terms. In reference to this, the text will examine the underlying factors that determine South Asian families' preferences for arranged marriages. We shall now turn to analyzing the socio-economic structure of South Asian families in the migrant country and Britain in order to understand its' relation to the ritual. Whilst observing Sikh families in Punjab, Ballard (1972) saw the traditional family system as 'joint' whereby a group of three or more generations live together and share a complex set of mutual obligations. These obligations are predominantly based on economic factors where the joint family work on land together and pool an overall household income. It is mainly concerned with rights and property, which is patrilineal in status (Ballard,1972;13). Women's rights to property are secondary and authority after marriage is transferred from natal groups to household groups. The household can include affinal relations created through marriage, as well as those of descent. Marriages are therefore built upon an arrangement between two families rather than two individuals. ...read more.

The family name is regarded as important to migrants and kin back home however this also correlates with economic and family heritage factors. Caste hierarchy, a Hindu tradition, is assessed by the male's social position in the division of labor in India (Shrikala, 1994) and although views on this have began to change, there still lies a preference for the marriage exchange of caste to be isogamous. Moreover, although the younger generation of Hindu's in Britain are becoming upwardly mobile, they still hold belief in the merchant ideology (Warrier, 1994;198). This illustrates that a cultural preferences for arranged marriages remains amongst some British South-Asians, even if they are affluent. Likewise, Pakistani migrants view and assess socio-economic status through wealth, property ownership, type of occupation and caste (Shaw 2000;137), otherwise known as 'biradari'. Although un-Islamic, for Pakistanis, the biradari remains an identifiable heritage which is sometimes announced with pride (Shaw, 2000;111) and families often see many caste members holding the same 'blood'. Within biradari and cousin marriages, kinship groups compete for status in order to maintain honor and so marriages are arranged to uphold their biradari. Since biradari is linked to ancestry traced through the male line, Pakistani's recognize that female sexuality, if uncontrolled, can be threatening and thus families try to secure marriages within the family so that the child's blood remains in the biradari (Shaw, 2000;212). Therefore, marrying close kin maintains the purity of blood and the inheritance within the 'biradari'(Shaw, 2000;138). Caste hierarchy can play a pivotal role when families are selecting a spouse outside caste boundaries. For instance, some families try to arrange their daughters marriage into a higher caste or biradari so that they can associate themselves as belonging to the higher caste group (Shaw,2000;126) thus an arranged marriage may reflect inter-social mobility. However, lower castes have established themselves in Britain by becoming wealthy business men and have achieved new authority, this can out overpower the values attached to their lower caste status thus increase their marriage ability. ...read more.

Additionally, Muhammed Anwar (1998) recognized that South Asians in Britain do want to retain their cultural identity such as their traditional family customs whilst they adapt to other aspects of western culture. Furthermore, Bhachu (1985) observed that twice migrants in Britain developed flexible forms of arranged marriages. Moreover, like the Gujarati Prajapati's, Sikh parents in Leeds have began to accommodate towards their children's changing values by accepting their chosen spouses so long as they are from a 'respectable' family (Ballard, 1972;20). Moreover "Sometimes an already established relationship can be presented as if it were a conventionally arranged marriage, so saving face for the family" (Cited in Ballard, 1979;129) Therefore in order to save 'face' of the family, a love marriage is presented as a traditional arranged marriage thus illustrating the importance of 'honor' and its' base for an arranged marriage. Many of the examples of cultural identification, assimilation and parents accommodation in regards to honor show that economic factors alone are not strongly focused upon, but rather the preferences for arranged marriages amongst South Asian groups in Britain has become further diverse. Derla Murphey (1987) whilst studying Mirpuris in Bradford and Leeds argued that there is a difference between forced and arranged marriages and so it is ambiguous to define the term into one simple category. Therefore with the different interpretations of arranged marriages, it is further complex to over-simplify preferences for arranged marriages amongst South-Asian families in Britain. Overall, economic structure and jobs affected the close knit family structure therefore control over behavior was exercised through arranged marriages so that the 1962 act would not effect chain migration. However, arranged marriages also maintain cultural heritage such as biradari and is a statement of recognition of family values. Status in British South-Asian communities is a complex interplay of factors expressed and explored in marriage strategies and in the distinctive forms of social activity. Preferences for arranged marriages are based on the pressure to conform to parental expectations such as producing a male heir, being part of family traditions and contributing to joint family expenses. ...read more.