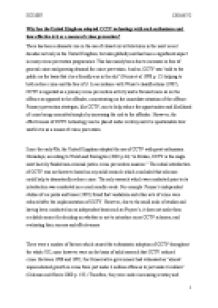 Why has the United Kingdom adopted CCTV technology with such enthusiasm and how effective is it as a means of crime prevention?

﻿SCS1007 120164752 Why has the United Kingdom adopted CCTV technology with such enthusiasm and how effective is it as a means of crime prevention? There has been a dramatic rise in the use of closed circuit television in the most recent decades not only in the United Kingdom, but also globally and has been a significant aspect in many crime prevention programmes. This has mainly been due to increases in fear of general crime and growing demand for crime prevention. And so, CCTV was ?sold to the public on the basis that it is a friendly eye in the sky? (Norris et al 1998 p. 15) helping to both reduce crime and the fear of it. In accordance with Weiss?s classifications (1987), CCTV is regarded as a primary crime prevention activity and is focused more so on the offence as opposed to the offender, concentrating on the immediate situation of the offence. Primary prevention strategies, like CCTV, aim to help reduce the opportunities and likelihood of crime being committed simply by increasing the risk to the offender. However, the effectiveness of CCTV technology can be placed under scrutiny and it is questionable how useful it is as a means of crime prevention. ...read more.

By 2000, 13 independently conducted studies had taken place (Coleman and Norris 2000 p.165.) Two examples which indicated that CCTV was particularly successful in reducing crime are Airdrie (1993) and Newcastle and Kings Lynn (1995.) In 1993, The Scottish Office commissioned research into the effectiveness of CCTV in helping to reduce crime and minimise the fear of crime amongst the population. 12 cameras were placed on open streets in Airdrie town centre. 2 years after the implementation of the cameras, 21% fewer crimes where recorded when compared to the two years prior to the CCTV installation, which clearly highlights a substantial reduction of almost a quarter. Further to this, crimes of dishonesty which include shoplifting and house robbery saw the most significant reduction of 48%. Altogether, since the CCTV scheme was introduced, the police were able to clear up 16% more crimes and offences.[1] However, Coleman and Norris (2000) noted that despite the clear reductions in some areas, there were increases in crime levels for different offences such as drug dealing and minor traffic violations. Similarly, Brown (1995) reported similar findings to those witnessed in Airdrie in Newcastle and Kings Lynn. ...read more.

CCTV technology is fairly effective as a means of crime prevention but it is not entirely beneficial and there have been some negative impacts witnessed. CCTV can both reduce and increase the amount of crime recorded in areas which makes it extremely problematic to determine exactly how effective it is. CCTV has undoubtedly aided in reducing levels of crime and helping to catch criminals in the areas in which they are situated, however previously unreported crimes are now recorded due to more schemes being implemented, which therefore has an adverse impact on crime rates. The small scale studies which have investigated the effectiveness of CCTV as a method of crime prevention have often been inconclusive or contradictory as crime displacement occurs or the numbers of other crimes increase. However, most have shared the conclusion that CCTV has helped to reduce some crime. As Welsh and Farrington (2002 p.45) discussed, if the government were to introduce or improve any more CCTV schemes they should be ?carefully implemented in different settings and should employ high quality evaluation designs with long follow-up periods.? Furthermore, the schemes should only be implemented if high quality, scientific evidence suggests that CCTV would be beneficial and effective. ...read more.