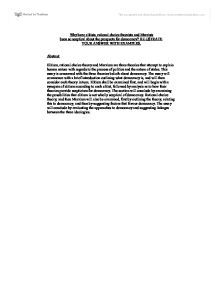 Why have elitists, rational choice theorists and Marxists been so sceptical about the prospects for democracy?

Rational choice theorists regard that 'all human behaviour can be viewed as involving participants who maximise their utility from a stable set of preferences and accumulate an optimal amount of information and other inputs in a variety of markets.' (Becker, 1986). Due to their beliefs on the rationality of humans, the rational choice theorists claim to be scientific as opposed to normative, and are concerned with creating a predictive and explanatory model for political science. Rational choice theorists therefore see everything as market driven, for example, Becker argues that marriage is a market in which, "each person tries to do the best he can, given that everyone else in the market is trying to do the best they can" (Becker, 1986: 115). Given this, the rational choice perspective on liberal and pluralist democracy is that it is not only improbable, but also impossible. This is largely due to a plurality of policy issues, and as no satisfactory democratic method of aggregation exists, the problem is not peculiar to simple democratic rule (Arrow, 1951). This is to say that as there are so many policy issues, there can be no party conglomerate of issues which commands a majority on all aspects of policy (Ward, 2002). ...read more.

Conclusion The three ideologies are sceptical for the prospects of democracy for different reasons. Elite theorists believe that political elites will naturally form in society from those who have sufficient knowledge and strength to rule the masses. Some theorists are normative in that they believe elites should rule and others are empirical, in that they believe elites will develop regardless of whether this is desirable. Rational choice theorists are sceptical of democracy as they feel that people's opinions are disregarded due to the aggregate of policy in political parties, thus causing a dilemma as to the electorates preferred policies (Dunleavy, 1987). Rational choice theory is a scientific theory, in that it is merely an analysis of human behaviour as opposed to a distinct political thesis. Marxism differs from both of these ideas in that it believes liberal democracy to be a tool of industrial capitalism. Marxists believe that true democracy can only happen in a communist society, as people would be emancipated from capitalism. . What they agree on is that liberal democracy is certainly a term to be distrusted, since it is misleading and inaccurate to describe modern systems, and whilst their differences are great it is this uniting idea that brings the theories together as ideologies which question, and are sceptical of, modern democracy. ...read more.