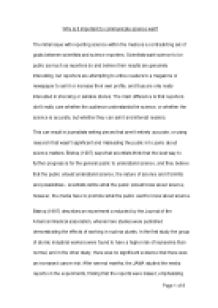 Why is it important to communicate science well? The initial issue with reporting science within the media is a contradicting set of goals between scientists and science reporters.

﻿Why is it important to communicate science well? The initial issue with reporting science within the media is a contradicting set of goals between scientists and science reporters. Scientists want science to be public as much as reporters do and believe their results are genuinely interesting, but reporters are attempting to entice readers to a magazine or newspaper to sell it or increase their own profile, and thus are only really interested in shocking or sellable stories. The main difference is that reporters don't really care whether the audience understands the science, or whether the science is accurate, but whether they can sell it and interest readers. This can result in journalists writing pieces that aren't entirely accurate, or using research that wasn't significant and misleading the public in to panic about science matters. Bishop (1997) says that scientists think that the best way to further progress is for the general public to understand science, and they believe that the public should understand science, the nature of science and it's limits and possibilities - scientists define what the public should know about science; however, the media have to promote what the public want to know about science. Bishop (1997) describes an experiment conducted by the Journal of the American Medical association, wherein two studies were published demonstrating the effects of working in nuclear plants. ...read more.

and to the rest of the body which has been adopted by many schools as part of the curriculum, is funded by the government and promoted by education authorities - and many teachers say it yields positive results (Goldacre, 2008). The premise of Brain Gym is that learning begins with movement, and a group of different exercises are performed in order to integrate body the and the mind. However, Goldacre (2008) has countered these claims in his book Bad Science, insisting that it is pseudo scientific, and has very little actual science or fact. He claims that exercises such as "Brain Buttons" (where children rub over their collar bones in order to stimulate blood flow through the arteries) are "nonsense" and also said "I'm yet to meet any child who can stimulate his carotid arteries inside his ribcage", whilst also noting that the creators of Brain Gym don't know the difference between oxidization (what causes rusting) and oxygenation (getting oxygen in to the blood) and their claims that processed food contains no water - which is certainly untrue. In this book, Goldacre reviews Brain Gym and dissects various exercises that are promoted by Brain Gym, and goes on to explain why most of these exercises are essentially arbitrary and have no effect - rather that the children are having regular breaks, regular exercise and drinking more water which is having an effect. ...read more.

This does not imply any kind of connection, just an unlikely set of circumstances that bring these elements together. Shortly after this, Wakefield made a press conference announcement suggesting that a single vaccination may be a better way to give the MMR; this is because supposedly having 6 different vaccinations separately are more harmful than just 1, and 6 painful injections are not easy for a child and it means it is also harder to miss appointments. However, despite these circumstances, the media eventually brought the MMR issue to the front pages in 2001 and ignored these facts, as well as deliberately not reporting findings from other scientists that countered Wakefield's, then Tony Blair (then Prime Minister) did not give his son the MMR, which added fuel to the fire and caused a considerable uproar despite evidence from the NHS, the Institute of Medicine and the Royal Colleges that showed MMR was safe. The studies and examples of media abuse of science stories clearly demonstrate that science isn't being clearly communicated, and it is causing people to be misled about the world that surrounds them, the effects the world has on their health, and causes untold panic and fear within the general public when not handled in the correct way, as in the MMR hoax. The only way to ensure that people are not in a state of confusion about science, is to make sure it is communicated properly, and not overblown (or under-represented) by the media. ...read more.