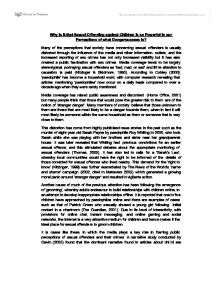 Why is it that Sexual Offending against Children is so Powerful in our Perceptions of what Dangerousness is?

Why is it that Sexual Offending against Children is so Powerful in our Perceptions of what Dangerousness is? Many of the perceptions that society have concerning sexual offenders is usually distorted through the influence of the media and other information outlets, and the increased reporting of sex crimes has not only increased visibility but it has also created a public fascination with sex crimes. Media coverage tends to be largely stereotypical, portraying sexual offenders as 'bad, mad, or sad' and little attention to causation is paid (Kitzinger & Skidmore, 1995). According to Cobley (2000), 'paedophile' has become a household word, with computer research revealing that articles mentioning 'paedophiles' now occur on a daily basis compared to over a decade ago when they were rarely mentioned. Media coverage has raised public awareness and discontent (Home Office, 2001) but many people think that those that would pose the greater risk to them are of the notion of 'stranger danger'. ...read more.

which generated a growing moral panic around 'stranger danger' and resulted in vigilante action. Another cause of much of the previous attention has been following the emergence of 'grooming', whereby adults endeavour to build relationships with children online, in an attempt to develop inappropriate relationships offline. It is reported that one in five children have approached by paedophiles online and there are examples of cases such as that of Patrick Green who sexually abused a young girl following initial contact in a chartroom (The Guardian, 2001). Due to its level of interactivity, with provisions for online chat, instant messaging, and online gaming and social networks, the internet is a very attractive medium for children and hence makes it the ideal place for sexual offenders to groom children. It is cases like these, in which the media plays a key role in framing public perceptions of sexual offenders and their crimes. A narrative study conducted by Gavin (2005) ...read more.

Although the perceptions of those who commit sexual offences against children are very similar to those who commit sexual offences against other members of society, it is believed that those who offend against children are perceived as more dangerous, not because of who the offender is but because of who their victims are; children (Craissati, 1998). Whether the victim is known to the offender or not, when it comes to a child victim, there is an outcry of moral panic and increased fear. This is because a child does not deserve to become a victim of any sort, let alone a victim of a sexual offence. When members of society read reports about a sexual crime committed against a child, the most common perceptions about the victim are those based around the child's innocence, how they are unable to defend themselves against a much older and stronger offender, and, particularly in the cases where the victim is known to the offender, how the position of trust has been abused and broken. ...read more.