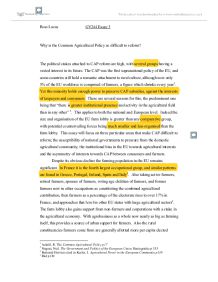 Why is the Common Agricultural Policy so difficult to reform?

Ross Lucas GV244 Essay 3 Why is the Common Agricultural Policy so difficult to reform? The political stakes attached to CAP reform are high, with several groups having a vested interest in its future. The CAP was the first supranational policy of the EU, and some countries still hold a romantic attachment to rural culture, although now only 5% of the EU workforce is comprised of farmers, a figure which shrinks every year1. Yet this minority holds enough power to preserve CAP subsidies, against the interests of taxpayers and consumers. There are several reasons for this, the predominant one being that "there is greater institutional presence and activity in the agricultural field than in any other" 2. This applies to both the national and European level. Indeed the size and organisation of the EU farm lobby is greater than any comparative group, with potential countervailing forces being much smaller and less organised than the farm lobby. This essay will focus on three particular areas that make CAP difficult to reform; the susceptibility of national governments to pressure from the domestic agricultural community, the institutional bias in the EU towards agricultural interests and the asymmetry of interests towards CAP between consumers and farmers. ...read more.

Also instead of COREPER, the Agricultural Council is supported by the Special Committee of Agriculture, which is staffed by officials from national agricultural ministries, increasing the presence of officials sympathetic to agricultural, and the difficulties of passing any amendments that do not comply with the interests of farmers. It is very difficult for other ministers to pressure the Agricultural Council. It is not uncommon for there to be disputes between ministers. For example in the 1980's the German agricultural minister opposed proposals from the German finance minister to scale down CAP subsidies.8 Finance ministers can only get involved over key budgetary questions regarding the funding of the CAP, and the heads of government are only normally involved to negotiate the major reform packages. Therefore there is a broad policy area exclusive to the Agricultural Council, again making reforms contradicting the interests of wider agricultural community difficult to pass. The interests of farmers are also protected by the way the CAP is administered by the Commission. The agricultural commissioner in charge of proposing reforms to the CAP system has always been from a state with strong interests in farming, and often from a political party with ties to agricultural interests. For example Franz Fischler, an Austrian Christian Democrat9. ...read more.

This is partly because they view the production of food to be a worthwhile investment, and because farmers have won support by advocating there 'green role' as protectors of the environment and stressing the lack of other job opportunities in urban areas that already have high unemployment. This is particularly obvious in France where the government also offers support to farmers by stressing the value of farm exports to the balance of trade11. This reduces the incentive for the government to battle the farmers over reform, as it will be unpopular with farmers and non-farmers alike. To conclude, the power and influence of the broader agricultural community is behind the difficulty of reforming CAP. At the national level, farming officials retain privileged access to government ministers, and by not cooperating with reform programs farmers can prevent any controversial reform from working. National governments are afraid of losing the electoral support of farmers, and therefore don't challenge there power. At the European level agricultural interests are protected in the Council and the Commission, and by numerous highly organised lobby groups. Also the lack of transparency of the CAP subsidies in general mean the consumers and taxpayers that lose most from the policy, are largely indifferent to its existence. Therefore although minor reform has occurred, no significant programs will be passed until agricultural control at the European and national level is broken. ...read more.

This essay is of a high standard and would likely receive a mark in the upper classifications (60-65+), depending on its adherence to the module outline and the expectations of the marker. It is well written, focuses tightly on the question, has a rigorous and logical internal structure which is signposted throughout, and makes a number of subtle points that I would associate with strong critical analysis. There are a small number of aspects that could perhaps be improved upon. The first is that the essay is somewhat myopic in focussing quite exclusively on the 'iron triangle' of EU institutions. Two other explanations for the difficulty in reforming the CAP that are often mooted are institutional inertia and path dependency, and a lack of convincing external pressures for change. These arguments often come to the fore when reform processes are examined (such as the McSharry reforms or Agenda 2000). Indeed, I think the primary way the argument could have been significantly strengthened would be to consider these reforms as points at which change has occurred, and to examine the nature of this change. What prompted these reforms? Are the pressures that pre-empted these reforms there usually, or were there exceptional circumstances? Raising the issue of change would allow for a brief examination of the counterfactual, and hopefully shed more light on why change occurs so rarely. Discussing the reforms would also help tick the 'independent knowledge' box. As it is, the author shows substantial subject familiarity, but the bibliography is a bit thin, and the critical engagement with the literature stands out as being weaker than the rest of the essay. Showing greater awareness of the analytical arguments of other authors, and engaging with them more directly, would have been helpful in elevating this essay from 'very good' to 'excellent'.