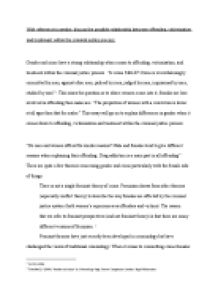 With reference to gender, discuss the possible relationship between offending, victimisation and treatment within the criminal justice process.

﻿With reference to gender, discuss the possible relationship between offending, victimisation and treatment within the criminal justice process. Gender and crime have a strong relationship when comes to offending, victimisation, and treatment within the criminal justice process. ?Is crime MALE? Crime is overwhelmingly committed by men, against other men, policed by men, judged by men, imprisoned by men, studied by men?[1]. This raises the question as to where women come into it; females are less involved in offending than males are. ?The proportion of women with a conviction is lower at all ages than that for males.? This essay will go on to explain differences in gender when it comes down to offending, victimisation and treatment within the criminal justice process. ?Do men and women offend for similar reasons? Male and females tend to give different reasons when explaining their offending. Drug addiction is a main part in all offending? There are quite a few theories concerning gender and crime particularly with the female side of things: There is not a single feminist theory of crime. Feminism draws from other theories (especially conflict theory) to describe the way females are affected by the criminal justice system (both women?s experiences as offenders and victims). The reason that we refer to feminist perspectives (and not feminist theory) is that there are many different versions of feminism. ...read more.

Women?s needs of course differ from those of men?s: Heidensohn (1996) argues that there were two likely explanations for the failure to do more than adapt male systems and techniques of confinement and punishment when seeking to address female prisoners: 1. Women were in many respects regarded as incorrigible. Once they had ?fallen? there was considered to be little hope of reformation. 2. They lacked ?champions? ? or at least sufficient champions. Elizabeth Fry, Josephine Butler and others had an important impact, but the more general exclusion of women from public life at this period limited what could be achieved. So, what does the make- up of the female prison population look like? Ethnic minority groups make up approximately 29% of the female population compared with 22% of the male prison population. Over 75% of female prisoners are single (including those who are separated, widowed or divorced), just over 25% were living as lone parents prior to imprisonment (compared with 3% of adult males) and, though estimates vary, at least 66% of young female offenders are mothers (Niven and Olagundoye, 2002). A report from the Chief Inspector of Prisons in 1997 suggested that at least 20% of female prisoners have children and 39% of young female prisoners had been in the care of a local authority at some stage in their childhood, and nearly 50% reported having suffered some form of abuse (a third reported sexual abuse, the remainder, physical abuse) ...read more.

Women don?t have much involvement in violent crimes whereas men do. If a woman does not pose a risk to the public then she should be supported to prevent her from committing a crime again. Since there are not many women offenders as a result there are not many women prisons which would mean that women would have to depart further from their families which would make visiting much harder. This would also affect any children the woman might have as it means the child is also receiving some sort of punishment as it is away from its mother. It could be said that women should only go to prison for serious offences. To conclude, offending occurs most in men as most women do not tend to commit crime. Women who do commit crimes are either committing a minor offence or are deviating from the traditional view of a woman. Women who have a past of violence or sexual assault could be classified as victims as well as offenders. The whole process in the criminal justice system is different for men and women. There is an issue with equality when it comes to the criminal justice system; men are treated more harshly than women are, through each stage of the criminal justice system for many reasons such as emotional needs and the character of a woman to that compared to a man. ...read more.