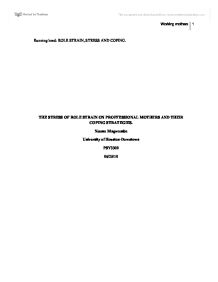 Running head: ROLE STRAIN, STRESS AND COPING. THE STRESS OF ROLE STRAIN ON PROFFESSIONAL MOTHERS AND THEIR COPING STRATEGIES. Neema Mngwamba University of Houston-Downtown PSY3309 06/25/10 Abstract. Among the many complex roles that a lot of people live, married women with children have the most stressful roles. This review focuses on the multiple roles that married working mothers hold and how that caused role strain which indeed lead to stress. Mothers in this case refer to those that have young children, the ones that are the most demanding. Also we will see how those mothers coped with the stress. The role strain discussed is basically the conflict created when the women were trying to balance their multiple roles as wives, mothers, professionals etc. Out of all them, the mother role and the professional role were the two that conflicted the most. One major thing that was found to contribute a lot to the stress and had to be taken into account was gender role/stereotypes. In coping with the stress many of the mothers were forced to adopt different strategies that were mainly categorized into two main strategies, problem-focused and emotional-focused strategies. Many of them preferred to utilize a strategy that leaves conflict/stress reduction as a responsibility of the individual. This means that while the work load/ demand remained the same they chose to work harder and more efficiently. ...read more.

One question that arises here is, how is that so given that managerial positions require longer work hours? And the answer is that, "objective time demands are not the critical issue in adults' experience of role strain" (Mark, 1977). Additionally, O'Neil and Greenbergers found that in unbalanced commitments, such as high job commitment and less parental commitments, professional mothers experienced less role strain. The unprofessional mothers however, were quite the opposite; they reported less role strain when they placed higher parental commitment than job commitment. This result was easily explained by the identity theory; "when the work role is highly salient to one's identity, work of a kind that elicits higher esteem from others and affords more challenge may generate less stress; when the work is less central to one's identity, however, work that is less scrutinized by others and less demanding may generate less strain" (O'Neil & Greenberger, 1994). Whatever the degree of commitment to work and family roles, trying to balance them sometimes leaves the mothers stressed. The general perception is that role strain almost always leads to stress. Nevertheless there has been some confusion as to whether having multiple roles actually increases stress hence reducing an individual's well-being. Nordenmark, from Umea University in Sweden, conducted an investigation as to whether multiple social roles (such employment and parental roles) ...read more.

and situational resources (spousal and social support) are the major factors in coping effectiveness. As mentioned before spousal and social support not only affectes women's decision making in choosing coping strategies, but also they increase coping effectiveness. Spousal and social support provides emotional support and assistance in performing household responsibilities. Emotional support allows the mothers to freely commit to their careers and not feel guilty integrating family and work. Several other studies also supported the findings that "self-esteem is associated with greater coping effectiveness" (Hamburg & Adams, 1967). Sometimes just the gratification they get from managing work and family psychologically helps them cope with stress. Many who chose to use more Increased Role behavior and Cognitive Restructuring strategies, experienced greater coping effectiveness. The reason was simply because the women did not recognize structural changes as an alternative that was feasible. The findings in this review focus on the role strains that face everyday working mothers, of whom have young children (infants to preschoolers). The investigations cited here mostly were centered on dual-career earners. Additional research has to be done to further address the strains and stress that faces all kinds of women such as mothers with older children, single mothers, first time mothers, mothers with sick children, mothers of different races etc. The good thing is that, no matter any woman's situations, work and parental roles are becoming more and more equally divided between men and women. ...read more.