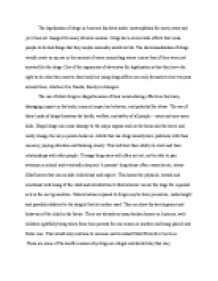 Would the legalization of drugs in America be a good thing?

﻿The legalization of drugs in America has been under contemplation for many years and yet it has not changed for many obvious reasons. Drugs have several side effects that cause people to do bad things that they maybe normally would not do. The decriminalization of drugs would create an up rise in the amount of users committing worse crimes than if they were just arrested for the drugs. One of the arguments of advocates for legalization is that they have the right to do what they want to their body but using drugs affects not only themselves but everyone around them, whether it be friends, family or strangers. The use of illicit drugs is illegal because of their mind-altering effects on the brain, damaging impact on the body, inimical impact on behavior, and potential for abuse. The use of these kinds of drugs threatens the health, welfare, and safety of all people ? users and non-users alike. Illegal drugs can cause damage to the major organs such as the brain and the heart, and really change the way a person behaves. Adults that use drugs usually have problems with their memory, paying attention and thinking clearly. This will hurt their ability to work and their relationships with other people. Teenage drug users will often act out, not be able to pay attention in school and eventually drop out. ...read more.

Two former police chiefs, whose experience included protecting five of America?s largest cities and serving on the nation?s largest professional police associations, after interacting with tens of thousands of officers found that the vast amount of law enforcement officers did not support legalization. An argument made by advocates for drug decriminalization is that drugs would be a financial bonus for the American economy. They believe that the public funds that are now being spent on the enforcement of drug laws could instead be used for other things such as education, health care, and social services. And then, drugs could eventually be taxed to bring in more revenue. The DEA?s responded to this with, ?Ask legalization proponents if the alleged profits from drug legalization would be enough to pay for the increased fetal defects, loss of workplace productivity, increased domestic violence, increased traffic fatalities and industrial accidents, and the myriad of other problems that would not only be high cost items, but extremely expensive in terms of social decay.? Kerlikowske, a member of the Obama Administration, clarified that the tax revenue from cigarettes is far outweighed by their social costs: ?Tobacco also does not carry its economic weight when we tax it; each year we spend more than $200 billion and collect only about $25 billion in taxes.? If the large tax on cigarettes is not able to even come close to making up for health and other costs associated with their use, it seems unlikely that the tax on drugs would make up for all their costs either. ...read more.