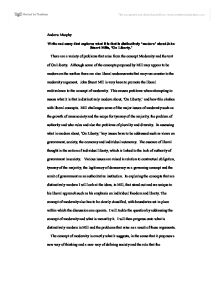 Write an essay that explores what it is that is distinctively 'modern' about John Stuart Mills, 'On Liberty.'

Andrew Murphy Write and essay that explores what it is that is distinctively 'modern' about John Stuart Mills, 'On Liberty.' There are a variety of problems that arise from the concept Modernity and the text of On Liberty. Although some of the concepts proposed by Mill may appear to be modern on the surface there are also liberal undercurrents that may run counter to the modernity argument. John Stuart Mill is very keen to promote the liberal ambivalence to the concept of modernity. This causes problems when attempting to assess what it is that is distinctively modern about, 'On Liberty,' and how this clashes with liberal concepts. Mill challenges some of the major issues of modernity such as the growth of mass society and the scope for tyranny of the majority, the problem of authority and who rules and also the problems of plurality and diversity. In assessing what is modern about, 'On Liberty,' key issues have to be addressed such as views on government, society, the economy and individual autonomy. The essence of liberal thought is the notion of individual liberty, which is linked to the lack of authority of government in society. Various issues are raised in relation to contractual obligation, tyranny of the majority, the legitimacy of democracy as a governing concept and the remit of government as an authoritative institution. ...read more.

'Human Nature is not a machine to be built after a model and set to do exactly the work prescribed for it, but a tree which requires to grow and develop itself on all sides according to the tendency of the inward forces which make it a living thing.'(R.P Anschutz) Mill also is distinctively modern in attacking the four dominant trends in liberal thought up to the mid nineteenth century. Mill attacks the idea of natural rights as proposed by Locke. The notion of rights being linked to a religious text is not acceptable for Mill as an anti-doctrinal thinker. Discussion and debate should be promoted as opposed to living in accordance with rules laid out in a book. 'Rights are non-sense upon stilts.'(Jeremy Bentham) Political rights put forward by Tom Paine are controversial for Mill because he feels that liberty should take preference over democracy. Mill does not like the concept of democracy because it allows for tyranny of the majority. When Mill argues against the idea of democracy he moves away from a modern outlook on government with preference for rule by the wise as opposed to the majority. Freedom of the individual is viewed as the one thing that is not contingent. The notion of utility in Mill is not acceptable in the circumstance that the way of measuring the rationality of a policy is the way it advances the greater benefit for the greatest number of people therefore overriding individual liberty. ...read more.

The diversity and individual orientated state that Mill desires offers huge potential for adversary within society as there essentially is no system of checks and balances to guard against over enthusiasm. Punishment of actions is only considered after actions have taken place as opposed to a system of checks and balances to provide preventative remedy. In enacting internal energy and freedom of the individual there can be the potential for using such creativity in the wrong manner and direction. This was a central concern for Kant who realised that the unchecked nature of the individual has potential anarchy and disorder. Utility is central to the Liberal approach in promoting the greatest good to the greatest number. In doing so the minority are oppressed which is argued against in On Liberty which offers and ideological clash in Mill. The extent of individual liberty and lack of restriction is extremely modern in Mill as well his views on censorship, education and religion. However in being modern in certain aspects Mill still has one foot in the past in terms of his preference of government of the wise and his attack of the concept of democracy. Although Mill is a modern thinker he appears to go against liberal tradition and thought on utility, which raises questions over his modern outlook. There are key concepts in Mill that are modern however these concepts raise issues and problems that run counter to the modernity movement. ...read more.