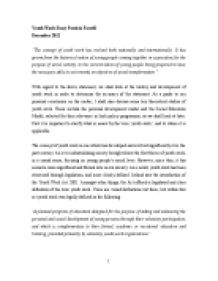 ﻿Youth Work Essay Patricia Farrell December 2012 ?The concept of youth work has evolved both nationally and internationally. It has grown from the historical notion of young people coming together in association for the purpose of social activity, to the current notion of young people being prepared to have the necessary skills to act towards an objective of social transformation.? With regard to the above statement, we shall look at the history and development of youth work in order to determine the accuracy of the statement. As a guide to my personal conclusion on the matter, I shall also discuss some key theoretical studies of youth work. These include the personal development model and the Social Education Model, selected for their relevance in Irish policy progression, as we shall look at later. First it is important to clarify what is meant by the term ?youth work?, and to whom it is applicable. The concept of youth work is one which has developed and evolved significantly over the past century. An ever industrialising society brought about the first forms of youth work, in a casual sense, focusing on young people?s social lives. However, since then, it has earned a more significant and formal role in our society. As a result, youth work has been structured through legislation, and more clearly defined. Ireland saw the introduction of the Youth Work Act 2001. ...read more.

It proposed more attention should be given to empowering young people themselves. This change was significant as it began to alter the role of the youth worker. As an adult they should not adopt the existing dictatory positions held by others such as social workers and teachers. Instead it encouraged a mentoring approach, where one should offer tools and guidelines to young people but leaving them with the end responsibility of making decisions etc. (Costello 1984). After an attempted release of an Act in 1997, which fell through due to it coincidence with the change in government, 2001 brought stability. The first fully operable act of legislation in Ireland for Youth work as its own entity was the Youth Work Act 2001. This too was a crucial turning point as it meant allocation of much needed funding and lead to the National Youth Work Development Plan in 2003. This provided structure to the progress of youth work and guidelines to the use of funding to aid voluntary organizations. (P.Burgess). Much of the policy established in Ireland was influenced by theoretical models developed by Louise Hurley. The two main models of youth work are The Personal Development Model and The Critical Social Education Model. The first model encourages a youth work programme, where by the mentor helps to offer empowerment to the young person, allowing them to make guided but individual decisions about life. ...read more.

It would be difficult to argue such an idea, as there is documented evidence of such progression. The origins began with the recreational youth organizations at the end of the industrial revolution, through to the Catholic Church organizations of the 20th century. Finally in the present 21st century, Youth work has become a legislated concept. It is still functioning independently of main stream bodies relating to young people and their well being, however gaining the necessary state support to ensure security and protection. There may still be a long way to go in terms of attitudes towards this area, and a higher regard may be required so we can realize the importance that such schemes bear on our society?s future. However it seems unquestionable that huge changes have already been made, particularly in the past quarter of a century. Reference Costello Committee Report. (1984). The National Youth Policy Committee Final Report~ Dublin: Government Publications Youth work act 2001 Department of children and youth affairs Burgess P& Herrmann P Highways, Crossroads and Cul De Sacs: Journeys Into Irish Youth & Community Work Patrick Geddes: Social Evolutionist and City Planner By Helen E. Meller Published Taylor & Francis e-library 2005 0' Sullivan Committee, (1980). The Development of Youth Work Services in Ireland. Dublin: Government Publications Models of Youth Work: A sociological framework. By L Hurley and D Treacy Published 1993 Dublin: Irish Youth Press http://www.thebase.ie/whatwedo/yth_workmodel.htm Youth Work in Ireland: The Struggle for Identity By Hilary Jenkinson 2000 Irish Journal of Applied Social Studies: Vol 2, Article 6. National Development Plan 2007-2013 ...read more.

This essay aimed to discuss the development of youth work. I feel this aim was successfully achieved. The writer skilfully discussed the origin of the profession and made appropriate reference to youth work organisations such as the girl guides. Relevant legislation was brought in as well as policy. Remember to include the dates in relation to the latter ? don?t just state the policy name. Also provide a definition of a youth worker.
The writing style was good overall. Remember to reference correctly; check the Havard referencing guidelines.
4/5