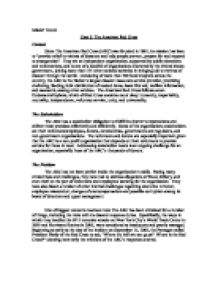 MBAP 710-01 Case 3: The American Red Cross Context Since The American Red Cross (ARC) was founded in 1881, its mission has been to "provide relief to victims of disasters and help people prevent, prepare for and respond to emergencies". They are an independent organization, supported by public donations and volunteerism, and is one of a handful of organizations chartered by the United States government, joining more than 175 other national societies in bringing aid to victims of disaster through the world. Consisting of more than 700 local chapters across the country, the ARC is the Nation's largest disaster mass care service provider, providing sheltering, feeding, bulk distribution of needed items, basic first aid, welfare information, and casework, among other services. ...read more.

They have also faced a number of other internal challenges regarding executive turnover, employee misconduct, charges of overcompensation and possible corruption among its board of directors and upper management. One of biggest concerns has been how The ARC has been criticized for a number of things, including the risks with its disaster response duties. Specifically, the ways in which they handled the 9/11 terrorists attacks on New York City's World Trade Center in 2001 and Hurricane Katrina in 2005, were considered as inadequate and poorly managed. Beginning as early as the day of the incident on September 11, 2001, the Pentagon called President Healy of the Red Cross to ask, "Where the h**l are you guys? Where is the Red Cross?" ...read more.

Personally, I admire the changes that have been publicly made for the organization, but I believe that only holds an insufficient amount of water considering those changes were only made after facing criticism and ethical internal challenges. I found it interesting that not once does the word "ethics" appear in a single item in the main promotional document provided to governmental agencies by the ARC. For an organization whose mission is to help those in need, witnessing life's most catastrophic disasters, to believe that something like ethics will automatically occur in that organization is just plain na�ve. Above all, I think that should be the first step to building a stronger organization. If society believes they have individuals that stand for ethics, they will be able to regain their trust in the organization. ...read more.