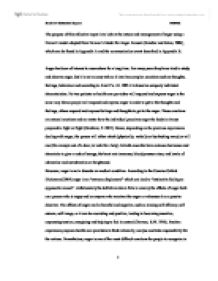 The purpose of this reflective report is to look at the nature and management of anger using a Firewall model adapted from Novaco's Model for Anger Arousal (Feindler and Ecton, 1986), which can be found in Appendix A and the communication event described in Appendix B. Anger has been of interest to researchers for a long time. For many years they have tried to study and observe anger, but it is not an easy task as it involves complex emotions such as thoughts, feelings, behaviour and according to Averill's J.R. 1983 it is based on uniquely individual characteristics. No two patients or health care providers will respond and express anger in the same way. Some people will respond and express anger in order to get to the thoughts and feelings, others respond and express feelings and thoughts to get to the anger. These emotions are natural reactions and no matter how the individual perceives anger the body is always prepared to fight or flight (Gamham, P. 2001). Hence, depending on the previous experiences dealing with anger, the person will either attack (physically, verbally or by shutting away) or will run (for example out of a door, to look for a help). In both cases the brain releases hormones and chemicals to give a rush of energy, the heart rate increases, blood pressure rises, and levels of adrenaline and noradrenalin are heightened. However, anger is not a disorder or medical condition. According to the Concise Oxford Dictionary (2004) anger is an "extreme displeasure" which can lead to "instinctive feeling as opposed to reason". Unfortunately the definition above fails to convey the effects of anger both on a person who is angry and on anyone who receives the anger or witnesses it as a passive observer. The effects of anger can be harmful and negative, such as loosing self-efficacy, self esteem, self-image, or it can be rewarding and positive, leading to becoming assertive, expressing tension, energising and helping to feel in control (Novaco, R.W. 1976). ...read more.

If the student, in the communication event described in Appendix B, would think that it was an unfortunate accident and the patient called her awkward because he felt frustrated and disappointed for forgetting the card the entire event might be prevented. To manage anger situations involves making choices about the best action plan (Bandura 1982). The common responses to anger are withdrawing, distancing, or leaving the situation (Tavris, C. 1989). Leaving the room, when the event becomes unmanageable and threatening, is considered to be the most effective action to take to prevent further harm, calm the feelings, to think more rationally, to regain the professional look, and to decide what to do next (Smith, E.M. and Hart, G. 1994). Remaining calm and thinking before acting is usually more helpful in controlling anger. This leads to support the contentions made by Tavris (1989), Wilting (1990) that controlling anger expression is very important for maintaining interpersonal relationships and a professional look. Components of professionalism include empathetic engagement, responsiveness to individual needs and effective communication (Barondess, J. 2003). There is evidence to indicate that patients view communication as an issue that is central to their care and feelings of wellbeing (McCabe, C. 2004). This supports Faupel, A. et al 1998 who states that patients' get angry due to failure in communication - either because the other person has not treated him right or because the person has not been able to communicate in any other way apart from getting angry. Often angry patients will not be receptive to information that they are given and can distort the message they hear, so the clearer the message that is given to the patient the less room there is for misinterpretation (Bundy, C. 2001). Therefore effective communication between the emotionally distressed, angry patient and the health care provider requires extra effort to ensure that the patient accurately perceived what has been communicated (Lockyear, P.L.B. ...read more.

One of the senior radiographers told me to go back to the patient and tell him again that we cannot help him without the request card. I asked the senior radiographer to come with me and explain to the patient why the chest examination cannot be carried out. The senior radiographer did not look happy about it but agreed to come with me. When the senior radiographer and myself went back - the patient seemed to be much calmer. The reasons why we were unable to carry out a chest x-ray examination without a request card was explained again, but this time with the solutions how we might be able to help him. The patient was offered to ring home and ask someone to bring the card for him, but this was not possible as he lived on his own after his wife died from breast cancer. Then the senior radiographer asked the patient if he knew the name of the doctor that sent him for the chest x-ray. The patient remembered the doctor's name, but it was not useful to us, because when we tried to ring the doctor's surgery there was no answer. When the solutions attempt to solve the problem did not give us a satisfactory result it was decided that we could not do anything else to help him apart from asking him to come back another day when it was convenient for him to do so. The patient was not happy about it and left the x-ray department distressed and angry. When patient left than I started to think why did it happen as it happened? Maybe it was something that I overlooked; maybe it was something that has been there for a while and the patient tried to tell me. Only then I realised why the patient got angry and what he was angry about. I was at fault, by getting angry I lost the ability to think clearly and I forgot that the patient also has feelings, wants and needs. ...read more.