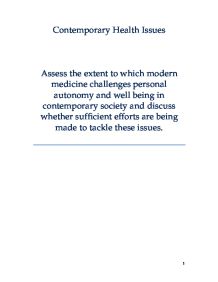 Assess the extent to which modern medicine challenges personal autonomy and well being in contemporary society and discuss whether sufficient efforts are being made to tackle these issues.

However Wilkes (1976) disagrees with the fact that they are good for the individual as all it does is reassure them. He argues that cough mixtures resembles homemade traditional remedies of warm water and honey. This just shows that even when it comes to minor illnesses such as coughs, individuals need the advice of a doctor as Wilkes (1976) suggested that an estimate of six million cough mixtures are prescribed in Britain by the NHS every year and this excludes those sold over the counter. In this case modern medicine has come about so it undermines individuals personal autonomy as people have transferred from using simple homemade remedies to consulting the doctor as their initial step. (Helman, 1978) On the other hand advice and consultation from the doctors is necessary when it comes to life threatening illnesses such as cancer. 'During 2003-2007, survival from prostate cancer five years after diagnosis was 79.7 per cent, 2.7 per cent higher than survival for men diagnosed in 2001 - 2006.' (Office for National Statistics, 2009) This shows that modern medicine is helping towards diseases such as cancer. Also treatments for some cancers and heart diseases have extended life expectancy. In a recent study it has been shown that there are certain treatments that can extend life expectancy for those who have prostate cancer. One of these treatments is with a drug called Taxotere. Life expectancy, for those men that took the drug, had increased by twenty per cent. Those that were given Taxotera lived an additional eighteen months but those that did not, lived only fifteen months. However there were side effects from taking Taxotera and these were nausea and hair loss. It could be argued that the difference with taking the drug is only three months and with the side effects it may not be worth it to take Taxotera. Nevertheless it shows that progress has been made towards the treatment for prostate cancer and that modern medicine is proving beneficial for the well being of the individual. ...read more.

Therefore a ban against animal testing may be the positive and beneficial move that is needed for modern medicine not to be harmful to individuals. To conclude, we could argue that modern medicine is a threat to personal autonomy as it is just a way for medical practitioners to exert their power and authority upon individuals in society. As Foucault (1973) stated that modern medicine is just another term for medical surveillance, a way in which doctors can keep control over their patients. For example the way in which the medical profession keep a close watch on pregnant women and childbirth. On the other hand, even though it does undermine the autonomy of the woman, it is debatable that it is not a threat to health. With childbirth taking place in a hospitalised room full of fully trained medical staff, it could be said that it is a lot safer and less harmful to the mother or the baby. Along with this we can also argue that modern medicine has helped towards increasing life expectancy and allowed for pain control and disease management to take place, for example insulin for diabetes and allupurinol for gout. But there have been cases where unnecessary drugs and medical interventions have proved harmful to the individual. Therefore measures that been taken to ensure that deaths caused due to medical faults are reduced. One measure that had been taken is to ban animal tests due to the fact that people have been killed from using drugs that have been proved by animal testing. Also a National Institute of Clinical and Excellence (1999) was set up to encourage doctors to start using newer treatments, mainly for clinical and cost effectiveness. Even with these efforts made there are still some cases where modern medicine is proving harmful to the individual. In this case it is arguable that there are always going to be positives and negatives within the medical industry and there will always be trial and error, just like everything else in society. ...read more.