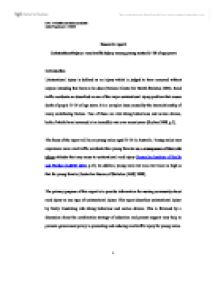 Case study. The focus of the report will be on young males aged 15-24 in Australia. Young males may experience more road traffic accidents than young females as a consequence of their risk taking attitudes that may cause to unintentional road injury

Research report Unintentional injury: road traffic injury among young males 15-24 of age years Introduction Unintentional injury is defined as an injury which is judged to have occurred without anyone intending that harm to be done (National Centre for Health Statistics 2005). Road traffic accidents are described as one of the major unintentional injury problem that causes death of people 15-24 of age years. It is a complex issue caused by the interrelationship of many contributing factors. Two of these are risk taking behaviours and novice drivers, both of which have increased at an incredible rate over recent years (Kedves 2008, p.2). The focus of the report will be on young males aged 15-24 in Australia. Young males may experience more road traffic accidents than young females as a consequence of their risk taking attitudes that may cause to unintentional road injury (Australian Institute of Health and Welfare (AIHW) 2007, p.21). In addition, young male rate was over twice as high as that for young female (Australian Bureau of Statistics (ABS) 2008). The primary purpose of this report is to provide information for nursing community about road injury as one type of unintentional injury. This report describes unintentional injury by firstly illustrating risk taking behaviour and novice drivers. ...read more.

Community prevention strategy There are some solutions to preventing and reducing road injury such as road regulations, and community-based programmes that include safety education and parents' supports. The Australian Government has set up reasonable regulatory restrictions for a driver as a way to protect young drivers and other road user for example, late night driving restrictions, peer passengers restrictions, split provisional phase (P1 and P2), screen-based Hazard Perception Test (HPT) and some important regulations of license restrictions (National Road Transport Commission 2005, pp.34-59). Another example is focusing on safety education program, which has proven effective in reducing road traffic injury among young people. For example, RYDA (Road safe Youth Driver Awareness) is a non- profit company that has promoted road safety education program introduced to the youth of Australian community through Rotary Clubs (RYDA 2010). RYDA also illustrates that the focus of the programs are on attitude and awareness with the purpose of helping young people have a good understanding about their own safety and their environment such as understand their rights and the responsibilities as drivers, passengers and pedestrians. The survey shows that the road safety program can reduce 44% of road injuries, the survey based on the questionnaires of the relationship between the road safety education programs feedback to 320822 novice drivers aged 17 -24 years in New South Wales (NSW), Australia (Senserrick, Ivers, Boufous, Chen et al 2009). ...read more.