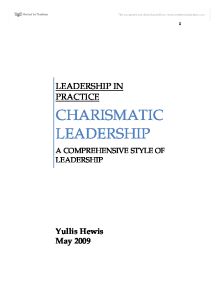 LEADERSHIP IN PRACTICE CHARISMATIC LEADERSHIP A COMPREHENSIVE STYLE OF LEADERSHIP Yullis Hewis May 2009 INTRODUCTION Leadership is not a science rather it is an art, a skill that can be developed. Previously it was thought that leaders are born and not made, leadership was considered as a gift, a magic that some people are born with and only those people can become successful and charismatic leaders, who can then develop followers. However, these concepts of leadership do not exist anymore, now it is considered as a trait, a skill that can be developed and learned. Bennis & Nannus (1985) observed and explained that leadership is a quality that can be developed and rejected the concept that "leaders are born and not made". Definitions of leadership by Bass (1990) and Yukl (1981) reflects the concept that it is a relationship process between individuals, in which the leader influences the followers to achieve the targeted goals also keeping the integrity of the group together. Contrary to the earlier theories of leadership (Great Man theory, Trait Theory) and influenced & inspired by the concept of transformational leadership by Burns (1978) and charismatic leadership by House (1976), Bass (1990) developed the model of "transformational leadership" and stated that leadership is a constructive relationship between the leader, the followers and the goal/target/objective rather than the sole skills and traits of the leader. Leaders can be divided into two main types, transformational and transactional. According to Curtin (2001; 239) "the transforming leader looks for potential motives in the followers, seeks to satisfy the needs and engages the full person of the followers. The result of transforming leadership is a relationship of mutual stimulation and elevation that converts followers into leaders and leaders into moral agents". The author highlights the fact that even when a transformational leader is gone he lives in the mind of his/her followers in the form of his/her ideas and vision, exhibited by their actions. ...read more.

envisioning, empathy and empowerment. If I relate this to my scenario when I had the chance to work as a leader, things were not aligned for me from the very start, because I never had a vision of my own nor was I compliant with the task I was provided with. Since, I was not informed what went wrong and why went wrong I felt a bit left out and was not able to formulate anything. Being more pragmatic in today's world especially in healthcare, you normally do not develop your own vision, rather a vision, a goal or a target is transferred to you by your higher authorities. Dedication and compliance towards the transferred vision and the organization makes the leader to take the vision as their own. The most important step in the process of envisioning I believe is the way the leader transfers the vision, and this is the point where a charismatic leader gets differentiated from a non-charismatic leader. A charismatic leader transfers the formulated vision by communicating with the followers through verbal means and by showing commendable behaviour. According to Kirkpatrick and Locke (1996) a charismatic leader inspires the followers to sacrifice their personal interests for the collective goal by exhibiting extreme dedication to the vision, making sacrifices and by getting involved in unconventional behaviour. For a vision to have influence on the followers it must touch them personally. If I had either my own vision or I was able to develop compliance towards the transferred vision, I might have been able to develop energy and enthusiasm in my team members by means of personal sacrifices and by leading from the front in everything I do. Since I never shared my objectives with my team members so all my sacrifices and hard work was probably taken by my team members as means of achieving my personal goals rather than towards achieving a collective vision. Hence, the sense of group work was missing from my department from the very start. ...read more.

Dye (2000) expressed the view point that only those healthcare leaders can be effective that possess a good understanding of their personal emotions and that of others. Empowerment the final process in the process of charismatic leadership is about transferring the power at the lower levels to increase the efficiency of work by using the self confidence and examples set by the leader himself/herself. As described by Fiol et al (1999) the whole process of charismatic leadership shows its effect in the stage of empowerment and the success of a charismatic leader can be best assessed at this stage. I now believe that along with being scientifically strong in the area of pharmacy it requires the traits of charismatic leader to be successful and effective in the field of pharmacy in the long run. If pharmacists in Pakistan can understand this concept they can progress to the next level like the pharmacists in UK (involvement in direct patient care) and can establish themselves as co-therapists rather than just dispensers or doing drug policing. What I have written down in this paper about charismatic leadership representing it as a comprehensive style of leadership, if I can implement this approach and this skill that I have learned the next time I am granted the opportunity of leading a pharmacy department, I am sure I will not resign out of frustration rather will resign leaving my department in hands of yet another charismatic leader brought up from my own ranks. MY REFLECTION It takes more than a good pharmacist to become successful and grow in the field of healthcare just like any other profession. A pharmacist with good knowledge of pharmacy and skills of a charismatic leader can really flourish in the profession regardless of the country of practice. I may not be able to change how every pharmacist and pharmacy works in Pakistan but I am sure that the application of skill and knowledge of charismatic leadership will make me successful and prominent among other pharmacists in Pakistan or at least in my city of residence and I may be able to influence other pharmacists. ...read more.