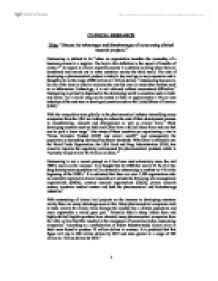 CLINICAL RESEARCH Title: "Discuss the advantages and disadvantages of outsourcing clinical research projects." Outsourcing is defined to be "when an organization transfers the ownership of a business process to a supplier. The key to this definition is the aspect of transfer of control."1 In respect to clinical research projects it is defined as being when they are transferred and carried out in other countries mainly the third world. The cost of developing a pharmaceutical product in today's day and age is very expensive and is thought to be in the range of 800 million to 1 billion dollars.2 Outsourcing has seen to be one of the ways in order to minimise the cost but even in many other markets such as in Information Technology, it is not achieved without encountered difficulties.2 Outsourcing is primarily dispersed to the developing world in countries such as India and China. As a similar drug can be tested in India at approximately a 60 per cent reduction of the cost seen in developed countries such as the United States of America (USA).3 With the competition seen globally in the pharmaceutical industry intensifying many companies from the USA are looking to reduce the cost of their development process in manufacturing, research and development as well as clinical trials.4 Many developing countries such as India and China have a skilled labour force and one that can be paid a lower wage.4 Also many of these countries are experiencing a rise in "Gross Domestic Product (GDP) ...read more.

The diagram below outlines a skeletal structure to the advantages seen when outsourcing clinical trial projects to India.7 This diagram can be associated principally with outsourcing to any country. Diagram: Showing the advantages of outsourcing clinical research projects in India (taken from http://www.bionity.com/articles/e/49043 on 04/04/2007)7 The speed for drug trials in India is exceeding expectations that the Clinical Data Interchange Standards Consortium (CDISC) in the USA has enquired into setting up its own department in India.3 The CDISC is an establishment that is involved in overseeing the development of clinical research organisation standards worldwide. Even though the outsourcing of clinical research projects in developing in India is roaring, the government officials in charge of health would like to permit pharmaceuticals companies such as Pfizer to perform trials simultaneous not only in India but other countries all over the world.3 Outsourcing of clinical research projects is undoubtedly found to provide clear benefits as firstly there in "no necessity to attract as well as retain any competencies that are not core to the company."8 Both time and money is saved on training to maintain competencies. There is also a reduction in fixed personnel as well as system costs. It is much easier to manage the workload. More importantly there is the removal of the hassle and worry associated with rigorous, documented system validation and tests as seen in the USA.8 The main danger poised with outsourcing clinical research projects is that are mainly ventured out to developing countries such as India and China. ...read more.

This has a significant impact on the performance of the drug in each individual's body. Also the genetic variation observed across the Chinese population has up till today been understood and characterised. This in retrospect to India poses a disadvantage as the Indian share similar racial characteristics to the western world both in Europe and USA.11 Outsourcing clinical research projects primarily to the third world with out a doubt does pose risks and has disadvantages but it is more advantageous. As even if seen at one level whereby Indian patients are being used as guinea pigs they are from a land of poverty.11 The participants are free to leave the trial at any stage and ultimately they are not only helping aid research they are obtaining free treatment. The companies that invest on outsourcing also provide improved facilities at the research centres along with beds for the patients.10 This consequently is enhancing the healthcare system in the country. The majority of the population approximately over 1 billion who is living in poverty will never have enough healthcare facilities whatever the means.12 The drug development process is a lengthy process and great efforts are made by companies to get drugs on the market but it is estimated only 15 % which enter this process actually make it.13 For that reason outsourcing is ideal not only in providing resources for that country but more importantly the treatments that are discovered and developed are vital because they have aided to save lives, and improve the quality of life for millions worldwide. ...read more.