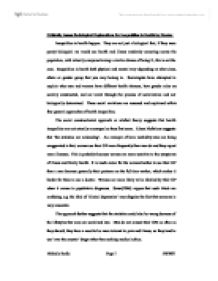 Critically Assess Sociological Explanations for Inequalities in Health by Gender

Critically Assess Sociological Explanations for Inequalities in Health by Gender Inequalities in health happen. They are not just a biological fact, if they were purely biological we would see health and illness randomly occurring across the population, with virtually everyone having a similar chance of being ill, this is not the case. Inequalities in health both physical and mental vary depending on what class, ethnic or gender group that you may belong in. Sociologists have attempted to explain why men and women have different health chances, how gender roles are socially constructed, and are learnt through the process of socialization and not biologically determined. These social variations are assessed and explained within four general approaches of health inequalities. The social constructionist approach or artefact theory suggests that health inequalities are not actually as unequal as they first seem. Alison Mcfarlane suggests that 'the statistics are misleading'. An example of how morbidity rates are being exaggerated is that, women see their GP more frequently than men do and they report more illnesses. ...read more.

against heart disease, so men respond to stresses in a way that is biologically more dangerous than it is for a woman. Women are biologically more at risk than men are especially whilst child bearing. However, female foetuses have better survival rates than male foetuses. Although the natural theory is supported by a variety of evidence and medical research, there is not nearly enough to count for the levels of morbidity and mortality in the different gender groups. Different cultures can also determine the health and illness rates as is explained in the cultural - behavioural analysis. This theory blames the individual for their ill health. The way in which men and women have been socialised, determines the morbidity and mortality that they have. Men tend to take more risks in life, they try to fill the masculine role of a man and with doing so, and they are more likely to suffer more injuries and accidents. ...read more.

Evidence of this theory is very poor. It does not take into consideration cultural behaviour; it is based on the occupations or lifestyles. If you do not have prestige and are under appreciated, your morbidity rate is high. Biological theories have also been dismissed. Brown and Harris (1979) claim that the higher rates of post-natal and menopausal depression among women suggest their greater dependence of wife and mother roles for a sense of achievement. Health, illness, disease and inequalities in health are very much products of society. Gender plays a big part in these inequalities, whether it be biological, materialistic, culturally caused or socially constructed. There are significant patterns of morbidity and mortality rates. After taking all the approaches mentioned into account the most sensible way of understanding inequalities in health by gender is to accept that they will always be there. BIBLIOGRAPHIES Brown and Harris (1979)Sociology in focus,(2000), causeway press Letts (2004)Letts Sociology AS revise, page 145. McFarlane, A (2001)Revise A2 Sociology, London, Letts. Szasz (1969)Revise AS Sociology (2004), page 141, London, Letts ?? ?? ?? ?? Michelle Bodle Page 1 5/9/2007 ...read more.

The writer could have clarified what s/he considered a health inequality to be. When writing in relation to the social constructionist approach, the writer seems to believe that a health inequality is women going to see their GP more frequently than men. This would not generally be the shared view amongst sociologists of health inequalities. It is therefore not clear if the writer understands the concept.
There are some statements which need a reference to support them, and the conclusion should be much stronger. Gender inequalities exist - what can be done to reduce them?

The writing style is good overall.