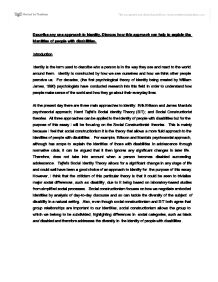 Describe any one approach to identity. Discuss how this approach can help to explain the identities of people with disabilities.

Describe any one approach to identity. Discuss how this approach can help to explain the identities of people with disabilities. Introduction Identity is the term used to describe who a person is in the way they see and react to the world around them. Identity is constructed by how we see ourselves and how we think other people perceive us. For decades, (the first psychological theory of identity being created by William James, 1890) psychologists have conducted research into this field in order to understand how people make sense of the world and how they go about their everyday lives. At the present day there are three main approaches to identity: Erik Erikson and James Marcia's psychosocial approach; Henri Tajfel's Social Identity Theory (SIT); and Social Constructionist theories. All three approaches can be applied to the identity of people with disabilities but for the purpose of this essay I will be focusing on the Social Constructionist theories. This is mainly because I feel that social constructionism it is the theory that allows a more fluid approach to the identities of people with disabilities. For example, Erikson and Marcia's psychosocial approach, although has scope to explain the identities of those with disabilities in adolescence through normative crisis, it can be argued that it then ignores any significant changes in later life. ...read more.

This contradicts Erikson and Marcia's psychosocial theory and Tajfel's SIT approach and could even be seen as a criticism to the social contrusctionism theory as it goes against the view of ourselves having a stable identity: a stable sense of who we are. However, it could then be argued that we develop one continuous identity in our autobiographical narratives of ourselves as having a stable identity. Other factors of the social constructionist theories are: we use our identities to negotiate everyday interactions; there are differences between people who belong to the same social category and identity involves power relations. I will explain these points in a little more detail as I apply them to the identities of people with disabilities. Social constructionist approach to the identities of people with disabilities In order to discuss identity, especially in relation to disability, I would have to explain the concept of embodiment. Embodiment is an important factor in all three identity theories. It indicates that as we live through our bodies, we experience them physically and biologically at the same time as socially and psychologically. It is easier to be conscious of the importance of our bodies when they do not work as well - especially those who acquire a disability at some point of their life. ...read more.

In my opinion if identity is constructed socially one person's identity can be extremely diverse. In this day and age, with the help of technology, we could completely change our identities through social networking sites such as Facebook and other chat sites. Facebook in particular allows you to create your own website with your front page being your identity. It allows you to publicise your beliefs and to post your feelings as and when you wish and adds these feelings to your 'status' which is available to be seen by all your 'friends'. This means in effect you could create your online identity as you wish. And as in our culture today, your online identity is easy accessible and can account for a large part of our identities as social sites such as these become a part of everyday life. Conclusion Not one theory can answer all questions on identity. How we view the world and how we see other people, names we have for certain groups of people proves that language is imperative to S.C. We actively construct our identities according to the social situation we are in. Social relations. NEGOTIATE "Bruner (1990) suggests that 'we make ourselves' and our identities through the stories about ourselves that we tell others and ourselves (our autobiographical narratives)" (as cited in Phoenix, 2007, p. ...read more.

This essay aims to discuss identity theory in relation to disabled people. There is some good work noted